Three Ukrainian soldiers who say they were wounded and taken prisoner by Russia after one of the war’s biggest battles and later released, on Monday accused their captors of torture and psychological pressure.

The men, part of a force that spent weeks fighting from a vast steelworks in the southern port of Mariupol after Russia’s Feb. 24 invasion, told a news conference in Kyiv that their captors wanted to force them to confess to crimes against civilians.

Reuters was not able to independently verify the accounts of the trio, who said they were captured by Russian forces. Russia’s defence ministry did not immediately respond to a request for comment. Ukraine has previously accused Russia of war crimes and Moscow has denied the allegations.

“I was interrogated even before I started receiving antibiotics after my limb was amputated,” said Vladyslav Zhaivoronok, who lost a leg.

“The guys who were there were tortured. Some had needles inserted into their wounds, some were tortured with water, some received inadequate treatment,” he said.

The three were exchanged for Russian prisoners of war. It was not immediately clear when the swap took place but in June Ukraine announced that Russia had handed over 144 captives.

Zhaivoronok served with the Azov Regiment, a national guard unit. Some members of Azov had far-right and ultranationalist origins. read more

After fighting for weeks from the bunkers and tunnels of the steelworks, hundreds of Azov fighters surrendered in May. Though the Azov prisoners have not yet been formally charged, on Aug. 2 Russia’s supreme court ruled that the regiment was a terrorist organisation.

Russia invaded Ukraine in what it calls a “special military operation” to demilitarise its smaller neighbour and protect Russian-speaking communities. Ukraine and its Western backers accuse Moscow of waging an imperial-style war of conquest. read more

One of the released men, Denys Chepurko, also a member of Azov, said he had been held in a prison in the self-proclaimed Russian-backed Donetsk People’s Republic in eastern Ukraine.

He said some prisoners had been forced to strip naked and then squat.

“They wanted us to testify against our commanders, (to say) we had bombed the city, they wanted to shift the blame on us. I said I wouldn’t do it,” he said.

“They started beating me with sticks. I didn’t sign anything,” he said.

The third former prisoner, Dmytro Usychenko, said: “They threatened us with physical reprisals, shooting … they wanted us to confess that we killed civilians although we did no such thing”. 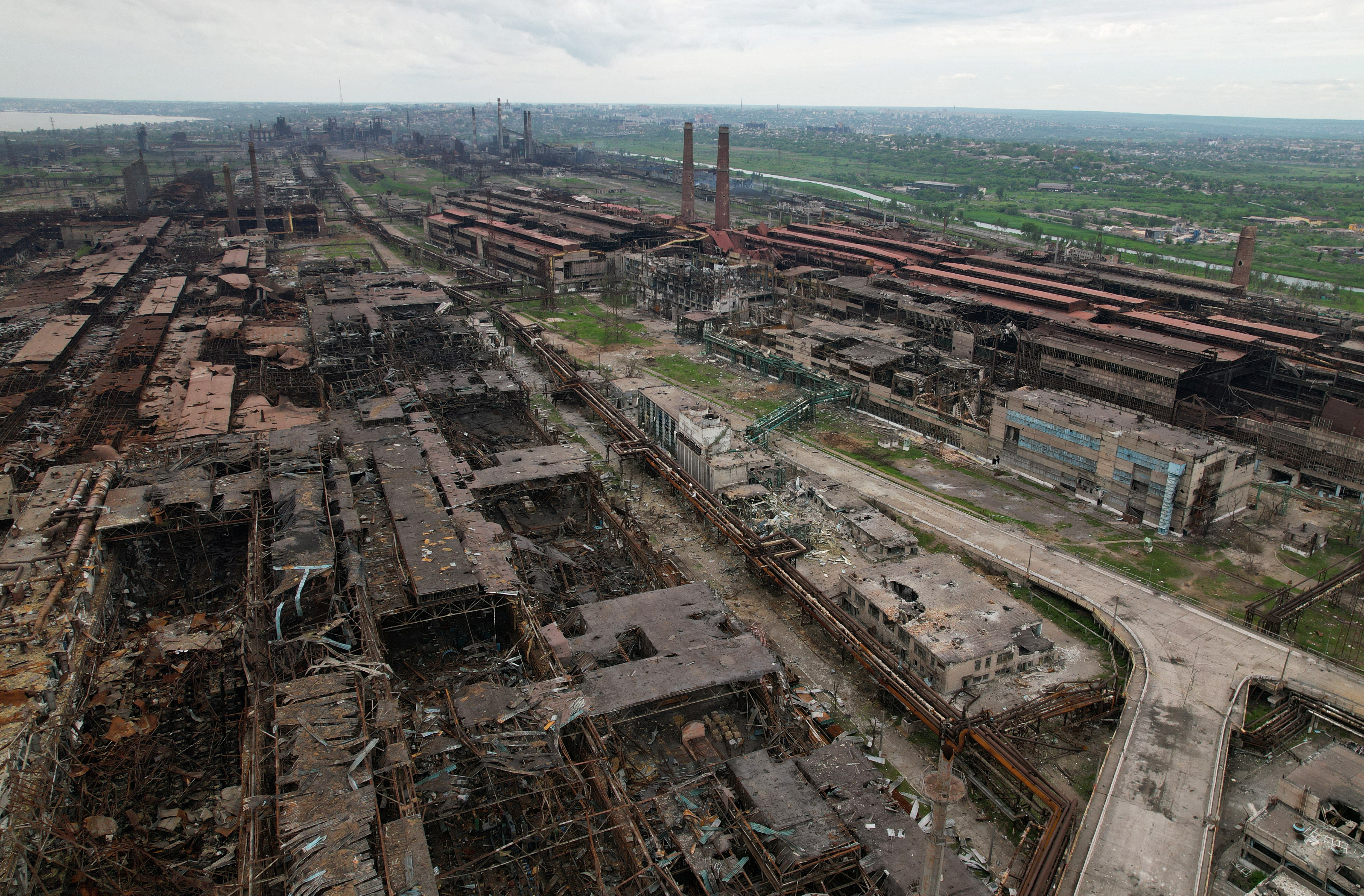 A view shows destroyed facilities of Azovstal Iron and Steel Works during Ukraine-Russia conflict in the southern port city of Mariupol, Ukraine May 22, 2022. Picture taken with a drone. REUTERS/Pavel Klimov 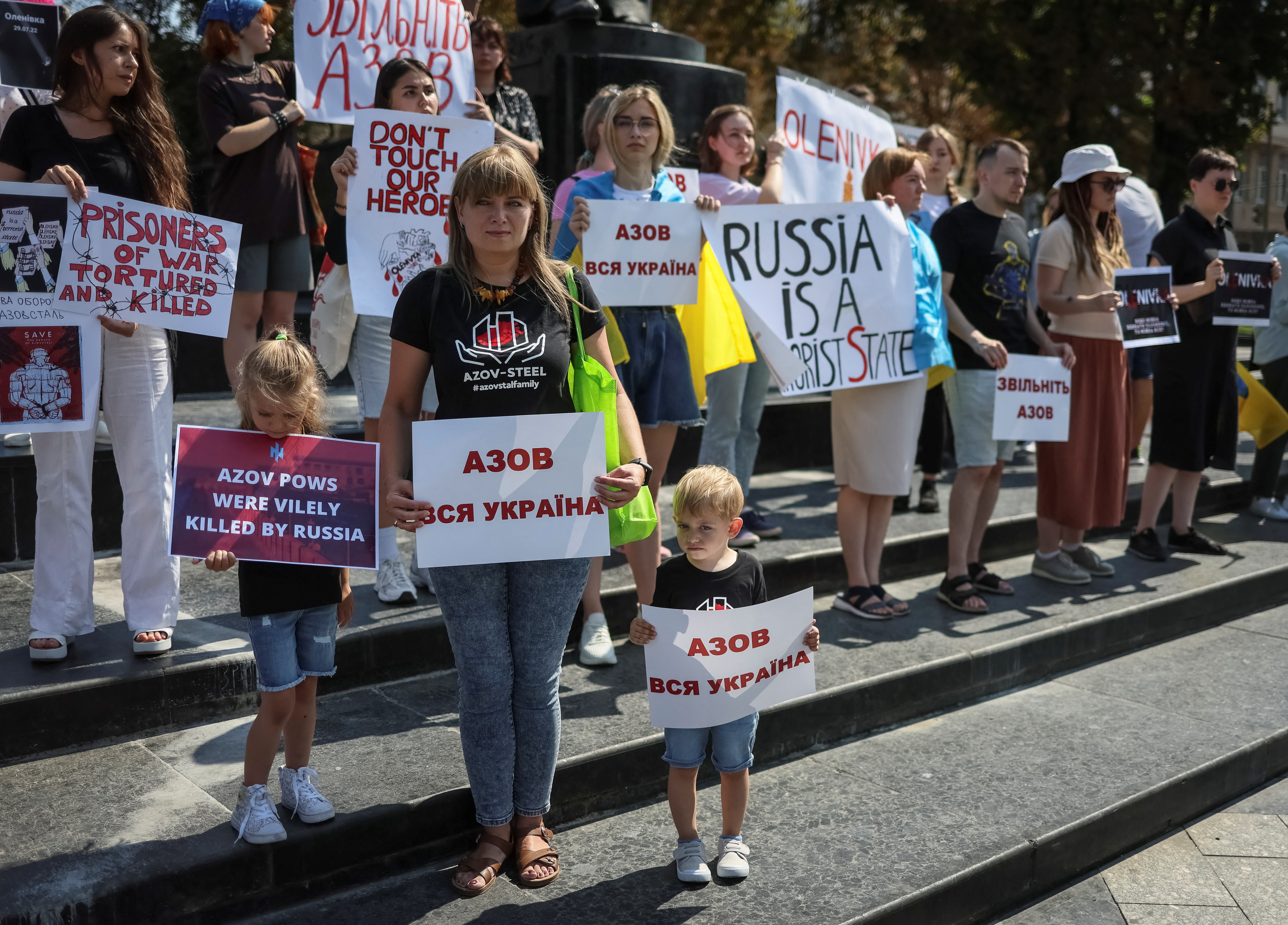 Activists, relatives and friends of defenders of the Azovstal Iron and Steel Works in Mariupol hold a rally to their support, as Russia’s attack on Ukraine continues, in central Lviv Ukraine August 18, 2022. REUTERS/Gleb Garanich