Listen to this article
2022-12-06T08:03:58Z
Scores of university students in Nanjing gathered to protest against the campus’ COVID policies, videos released on Tuesday (December 6) showed, as frustration continues to mount against China’s strict zero-tolerance measures.

People in China’s capital Beijing were allowed to enter parks, supermarkets, offices and airports without showing proof of a negative COVID-19 test on Tuesday, the latest in a mix of easing steps nationwide after last month’s historic protests.

“Beijing readies itself for life again” read a headline in the government-owned China Daily newspaper, adding that people were “gradually embracing” their newfound freedoms.

Authorities have been loosening some of the world’s toughest COVID curbs to varying degrees and softening their tone on the threat of the virus, in what many hope could herald a more pronounced shift towards normalcy three years into the pandemic.

“This might be the first step towards reopening from this pandemic,” Hu Dongxu, 27, told Reuters as he swiped his travel card to enter a train station in Beijing, which has also dropped the need for tests to ride the subway.

Both of the city’s airports also no longer require people to test to enter the terminal, state media reported on Tuesday, although there was no indication of changes to rules requiring passengers to show negative tests prior to boarding.

But further loosening beckons after a string of protests last month that marked the biggest show of public discontent in mainland China since President Xi Jinping took power in 2012.

China may announce 10 new national easing measures as early as Wednesday, two sources with knowledge of the matter told Reuters.

The prospect of further relaxation of the rules has sparked optimism among investors that the world’s second biggest economy would regather strength, and help to boost global growth.

The Chinese yuan has risen about 5% against the dollar since early November on expectations of an eventual reopening of China’s economy.

But on the ground, many people have been slow to adapt to the changing rules. Commuter traffic in major cities such as Beijing and Chongqing has remained at a fraction of normal levels.

Some people remain wary of catching the virus, especially the elderly, while there is concern about the strain the loosening could put on China’s fragile health system.

“My parents are still very cautious,” said James Liu, 22, a student in Shenzhen in the southern province of Guangdong, where authorities “abruptly” dropped testing requirements for entry into the family’s residential compound.

China has reported 5,235 COVID-related deaths as of Monday, but some experts have warned that toll could rise above 1 million if the exit is too hasty.

Analysts at Nomura estimate that areas now under lockdown represent around 19.3% of China’s total GDP, equivalent to the size of India’s economy but down from 25.1% last Monday.

This marks the first decline in Nomura’s closely watched China COVID lockdown index since the start of October.

Meanwhile, officials continue to play down the dangers posed by the virus, bringing China closer to what other countries have been saying for more than a year as they dropped restrictions and opted to live with the virus.

Tong Zhaohui, director of the Beijing Institute of Respiratory Diseases, said on Monday that the latest Omicron variant of the disease had caused fewer cases of severe illness than the 2009 global influenza outbreak, according to Chinese state television.

China’s management of the disease may be downgraded as soon as January, to the less strict Category B from the current top-level Category A of infectious disease, Reuters reported exclusively on Monday.

“The most difficult period has passed,” the official Xinhua news agency said in a commentary published late on Monday, citing the weakening pathogenicity of the virus and efforts to vaccinate 90% of the population.

Hu Xijin, a prominent commentator and former editor-in-chief of state-run tabloid Global Times, called for more measures to allow people to travel freely around the country.

“The general direction for the return to normal life is already very clear, and it is essential to restore the free movement of people across provinces to restore the economy,” he wrote in a blog post on Monday.

Analysts now predict China may reopen the economy and drop border controls sooner than expected next year, with some seeing it fully open in spring.

But more than half of Chinese say they will put off travel abroad even if borders reopen tomorrow, according to a survey of 4,000 consumers in China by consultancy Oliver Wyman.

But for all those wary of returning to normality, there are others clamouring for more freedoms.

“Let’s implement these policies quickly,” a Beijing-based lawyer surnamed Li wrote on WeChat, reacting to Tuesday’s announcement of the drop in testing requirements in the capital.

“Our lives and work have been affected for so long.” 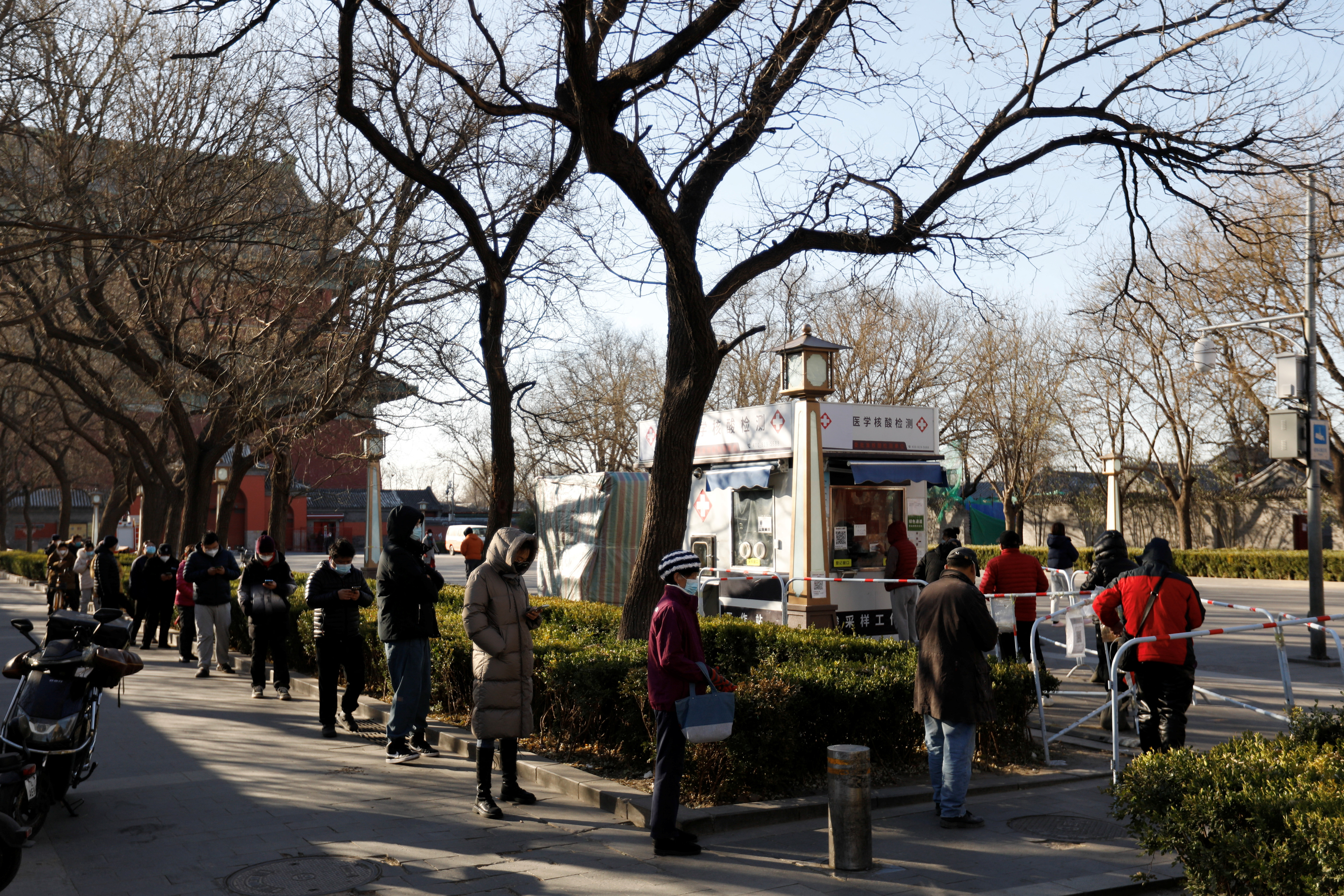 People line up at a nucleic acid testing site to get tested for the coronavirus disease (COVID-19) in Beijing, China December 6, 2022. REUTERS/Florence Lo 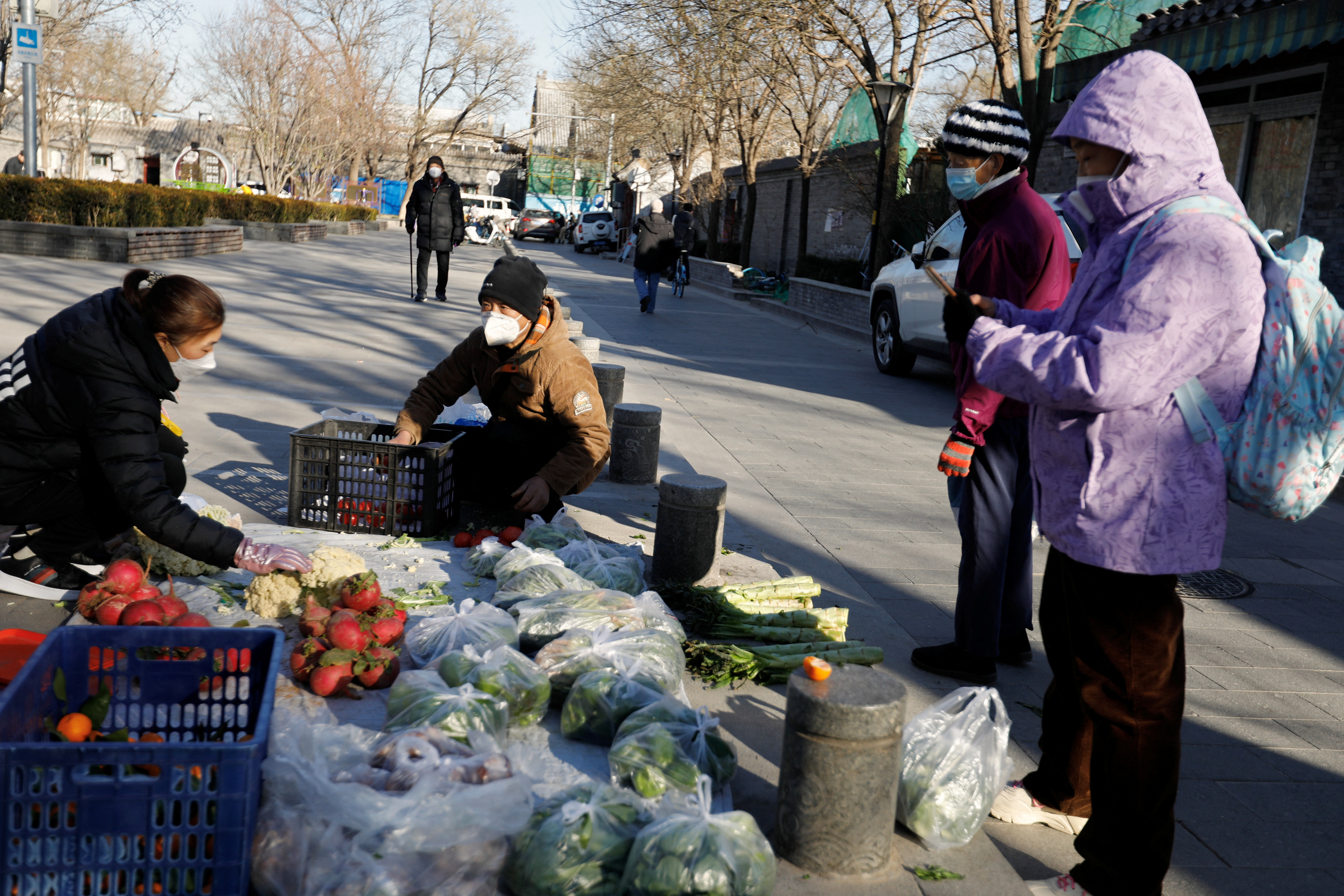 People shop for vegetables at a street stall amid the coronavirus disease (COVID-19) outbreak in Beijing, China December 6, 2022. REUTERS/Florence Lo 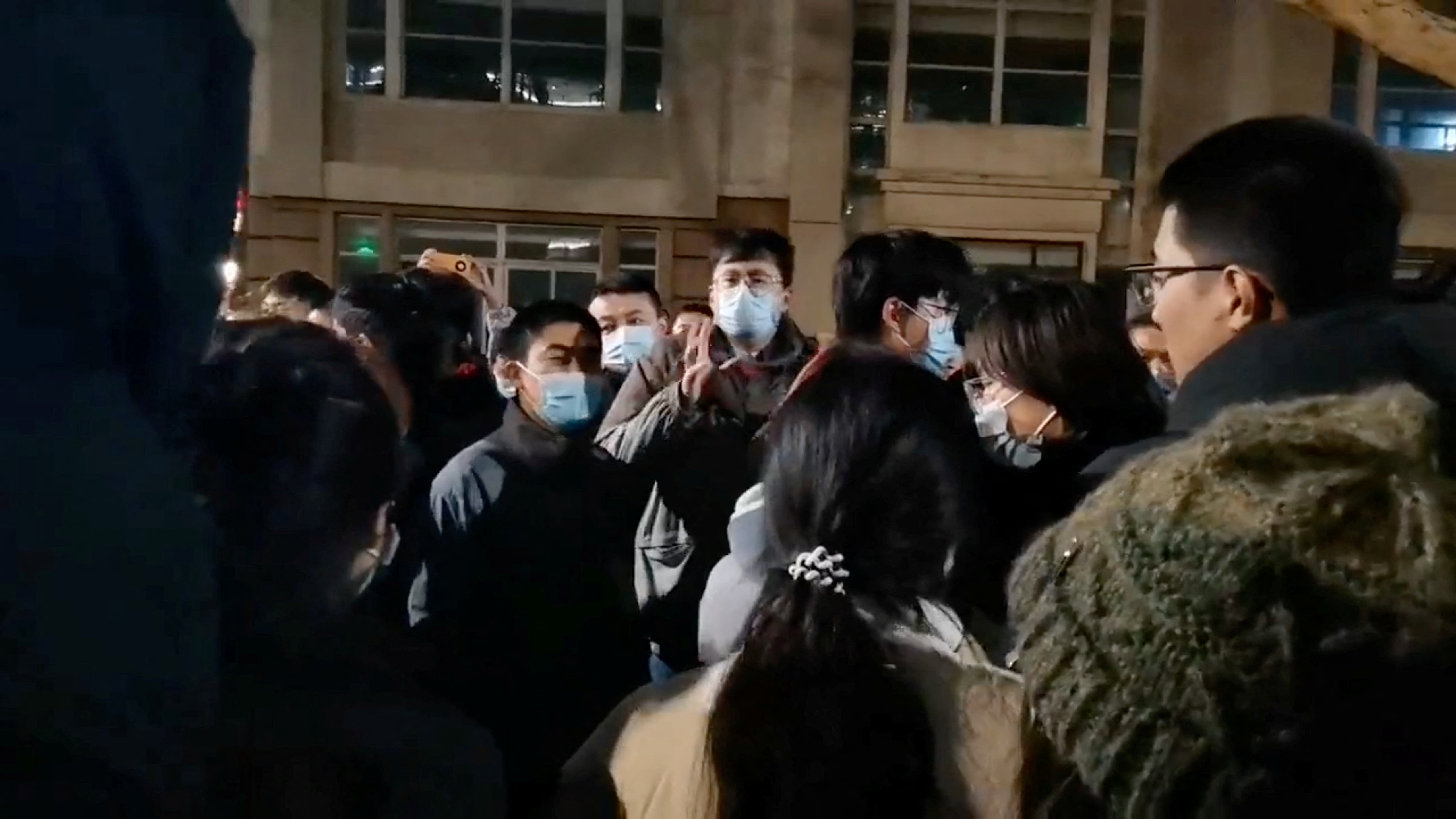 Students protest at the Nanjing Tech University demanding to be allowed to go home after a student tested positive for coronavirus disease (COVID-19) in Nanjing, Jiangsu Province, China, in this screen grab obtained by REUTERS on December 6, 2022. 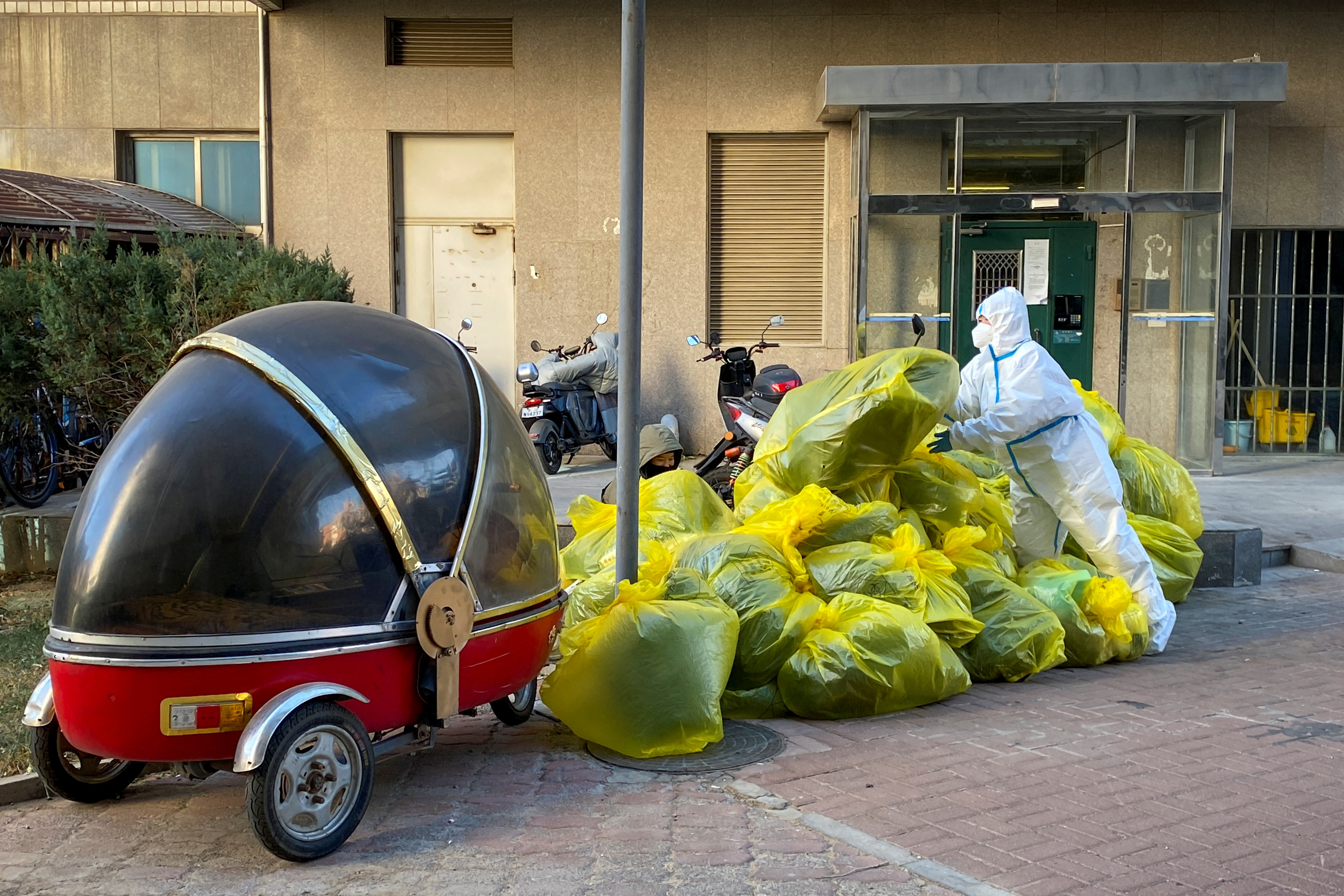 A pandemic prevention worker in a protective suit piles up bags of medical waste outside a building where residents isolate at home as coronavirus disease (COVID-19) outbreaks continue in Beijing, December 5, 2022. REUTERS/Thomas Peter 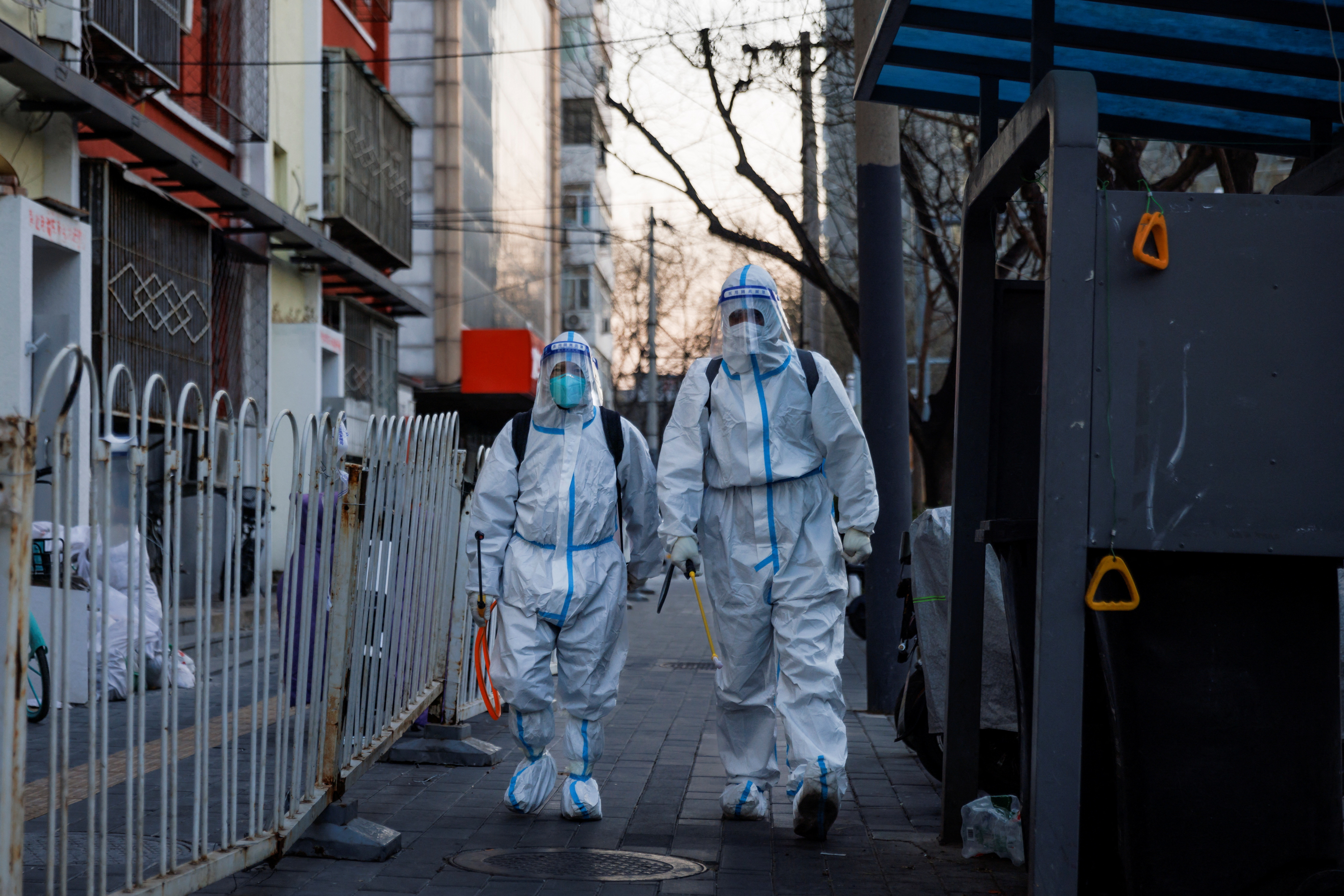 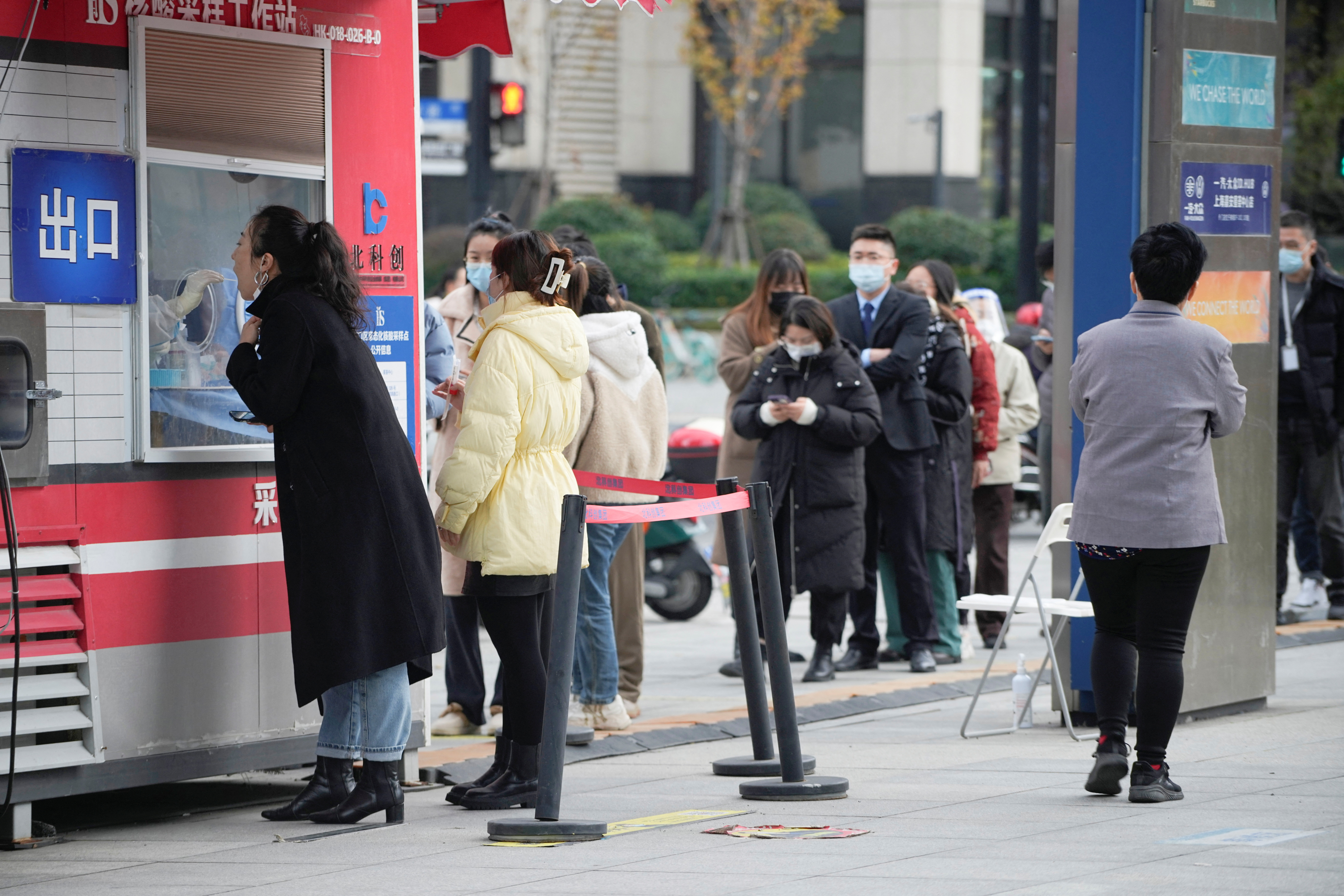 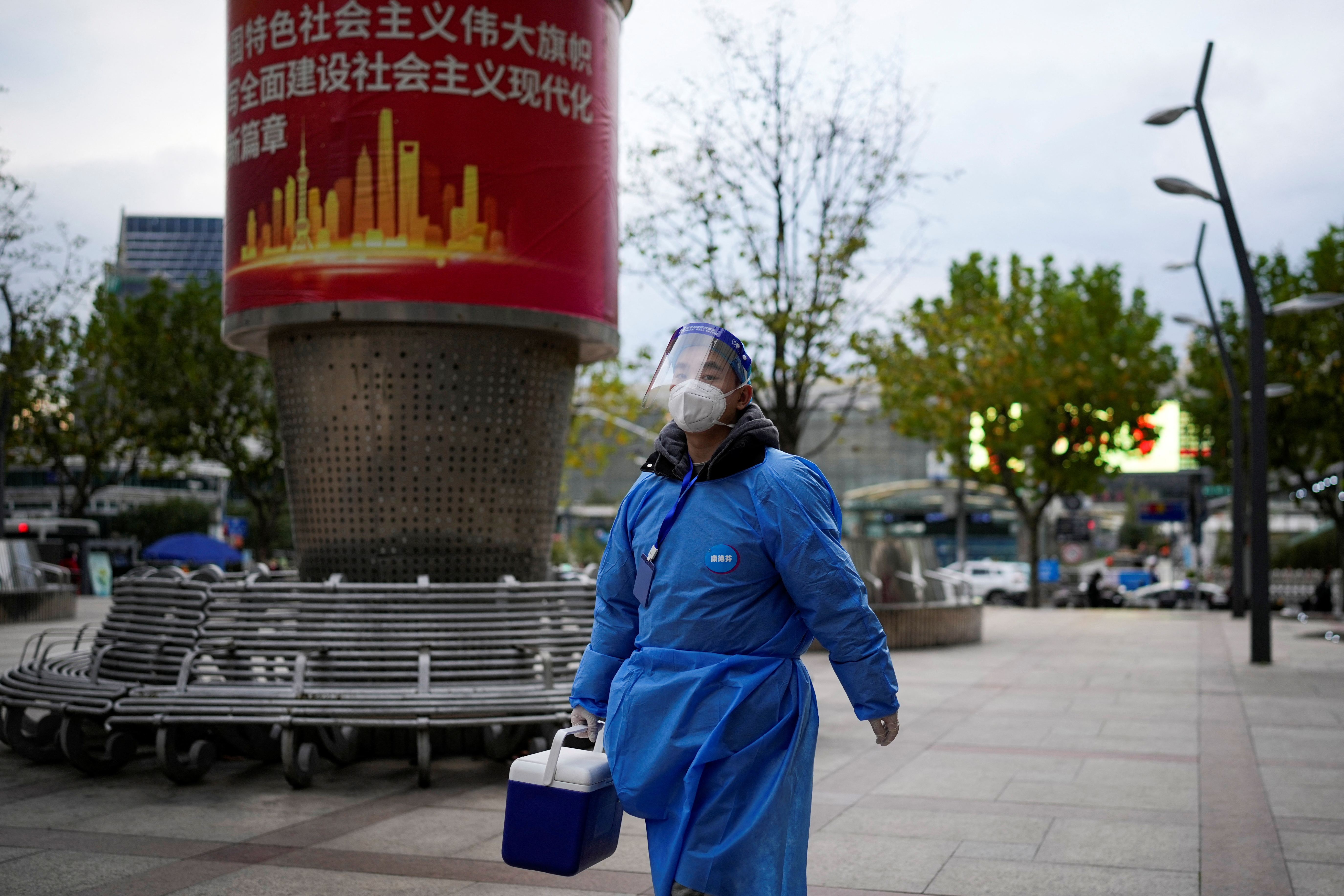