As a boy in the 1960s, David Wagner would run around his family’s Missouri farm with a glass jar clutched in his hand, scooping flickering fireflies out of the sky.

“We could fill it up and put it by our bedside at night,” says Wagner, now an entomologist.

That’s all gone, the family farm now paved over with new homes and manicured lawns. And Wagner’s beloved fireflies – like so many insects worldwide – have largely vanished in what scientists are calling the global Insect Apocalypse.

As human activities rapidly transform the planet, the global insect population is declining at an unprecedented rate of up to 2% per year. Amid deforestation, pesticide use, artificial light pollution and climate change, these critters are struggling — along with the crops, flowers and other animals that rely on them to survive.

“Insects are the food that make all the birds and make all the fish,” said Wagner, who works at the University of Connecticut. “They’re the fabric tethering together every freshwater and terrestrial ecosystem across the planet.”

It’s easy to think insects are doing OK. After all, they’re nearly everywhere — crawling through rainforest canopy, burrowing into soil, skimming freshwater ponds or, of course, flitting through the air.

On the biological “tree of life” — which classifies organisms to describe their evolutionary and genetic relationship to one another — insects fall under the branch, or phylum, called Arthropods, one of the 40 branches of the Animal Kingdom.

In terms of diversity, insects are unrivaled, representing two-thirds of the world’s more than 1.5 million documented animal species with millions more bugs likely still undiscovered, scientists say. By comparison, there are roughly 73,000 vertebrates, or animals with a backbone from humans to birds and fish — these represent less than 5% of the known Animal Kingdom, according to the International Union for Conservation of Nature (IUCN).

Their importance to the environment can’t be understated, scientists say. Insects are crucial to the food web, feeding birds, reptiles and mammals such as bats. For some animals, bugs are simply a treat. Plant-eating orangutans delight in slurping up termites from a teeming hill. Humans, too, see some 2,000 species of insects as food.

But insects are so much more than food. Farmers depend on these critters pollinating crops and churning soil to keep it healthy, among other activities.

* Insects pollinate more than 75% of global crops, a service valued at up to $577 billion per year, the Intergovernmental Science-Policy Platform on Biodiversity and Ecosystem Services (IPBES) says.

* In the United States, insects perform services valued in 2006 at an estimated $57 billion per year, according to a study in the journal BioScience.

* Dung beetles alone are worth some $380 million per year to the U.S. cattle industry for their work breaking down manure and churning rangeland soil, the study found.

With fewer insects, “we’d have less food,” said ecologist Dave Goulson at the University of Sussex. “We’d see yields dropping of all of these crops.”

And in nature, about 80% of wild plants rely on insects for pollination. “If insects continue to decline,” Goulson said, “expect some pretty dire consequences for ecosystems generally — and for people.”

Describing a stroll through Costa Rica’s Area de Conservacion Guanacaste rainforest, evolutionary ecologist Daniel Janzen in 2019 wrote: “Gone are the spiderwebs that decades back entangled those leaves. Gone is the nighttime sparkle in the leaves reflected from thousands of lycosid spider eyes.”

The world has lost 5% to 10% of all insect species in the last 150 years — or between 250,000 and 500,000 species, according to a February 2020 study in the journal Biological Conservation. Those losses are continuing, though estimates vary due to patchy data as well as uncertainty over how many insects exist.

In the tropics, insects can be “extremely hard to identify, because there are vastly more species than (we) are used to,” Janzen, a University of Pennsylvania professor, told Reuters. “There are more species within 100 kilometres of my dwelling in a national park in northwestern Costa Rica than in all of Europe.”

Not knowing exactly what’s out there makes it harder to detect trouble. One April 2020 analysis in the journal Science suggested the planet is losing about 9% of its land-dwelling insect population each decade. Another January 2021 paper tried to paint a clearer picture by synthesizing more than 80 insect studies and found that insect abundance is declining around 1% to 2% per year. For comparison, the human population is growing at slightly less than 1% per year.

“Even at the low end of 1% a year, after just 40 years you’re down more than one-third of species and one-third of individuals — a third of the entire tree of life lost,” said Wagner, who led the 2021 metastudy, published in the Proceedings of the National Academy of Sciences.

But the reality is likely worse. Wagner’s team offered an “incredibly conservative” loss estimate, he said, noting that many insect studies are conducted in protected areas such as nature reserves. Degraded farmland or cities would likely reveal far fewer insects.

The demise of insects can’t be attributed to any single cause. Populations are facing simultaneous threats, from habitat loss and industrial farming to climate change. Nitrogen overloading from sewage and fertilizers has turned wetlands into dead zones; artificial light is flooding out nighttime skies; and the growth of urban areas has led to concrete sprawl.

“Until recently, loss of land was the single greatest driver” of the decline, Wagner said. “But climate change is becoming a far more severe and ominous threat by drying out parts of the planet that were chronically wet. And that is absolutely catastrophic for a lot of insects.”

The introduction of non-native plants, which can dominate new environments, has also hurt insects. Because many insects have evolved to feed on or fertilize a single plant species, the disruption of the plant world can have an outsized effect. For example, the Tegeticula moth species pollinates California’s famed Joshua trees, while the succulent is the only food source for the moth’s offspring. If Joshua trees were to disappear, so too could the moth. And vice versa.

While the situation is bleak for insects at large, a few types of insects are thriving.

“It’s generally the pest insects that are thriving because they’re the ones that breed faster and are favored by human conditions, like all the waste we produce for them to lay their eggs in,” said Sussex’s Goulson.

As insects go, so go their predators.

In North America, nearly all songbirds feed insects to their young. But since 1970, the number of birds in the United States and Canada has fallen by 29%, or roughly 2.9 billion, which scientists theorize is tied to having fewer insects in the world. Some research also has linked insecticide use with declines in barn swallows, house martins, and swifts.

“Nature is just eroding away very slowly,” Wagner said. As insects disappear, “we’re losing the limbs and the twigs of the tree of life. We’re tearing it apart. And we’re leaving behind a very simplified and ugly tree.” 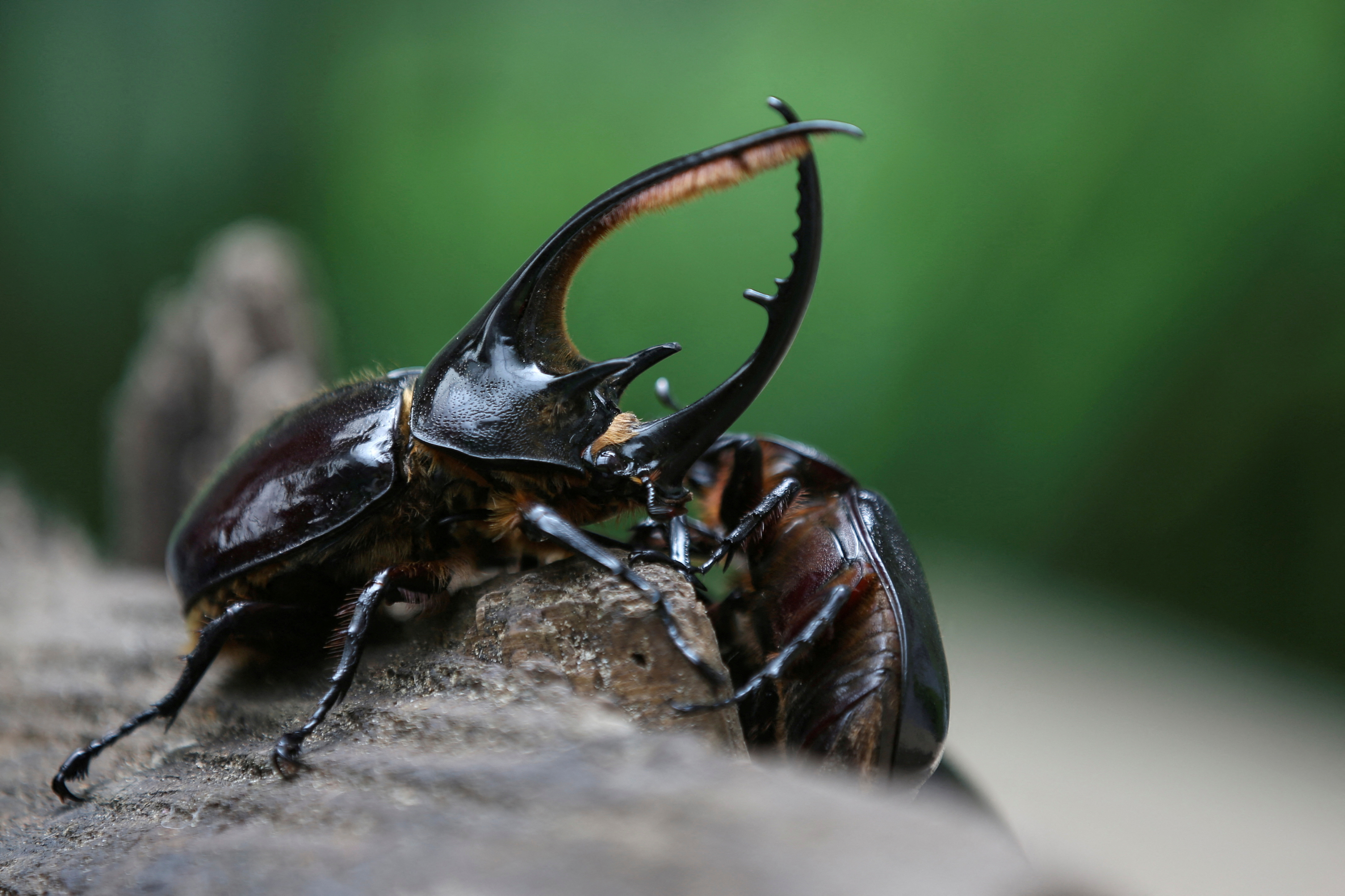 Beetles, which are sold as pets to several countries around the world and traded with the Kmushicoin cryptocurrency created by Tierra Viva, climb a trunk at the company’s production plant, where bio-compost and bio-fertilizer are produced, in Tunja, Colombia, October 8, 2021. REUTERS/Luisa Gonzalez/File Photo 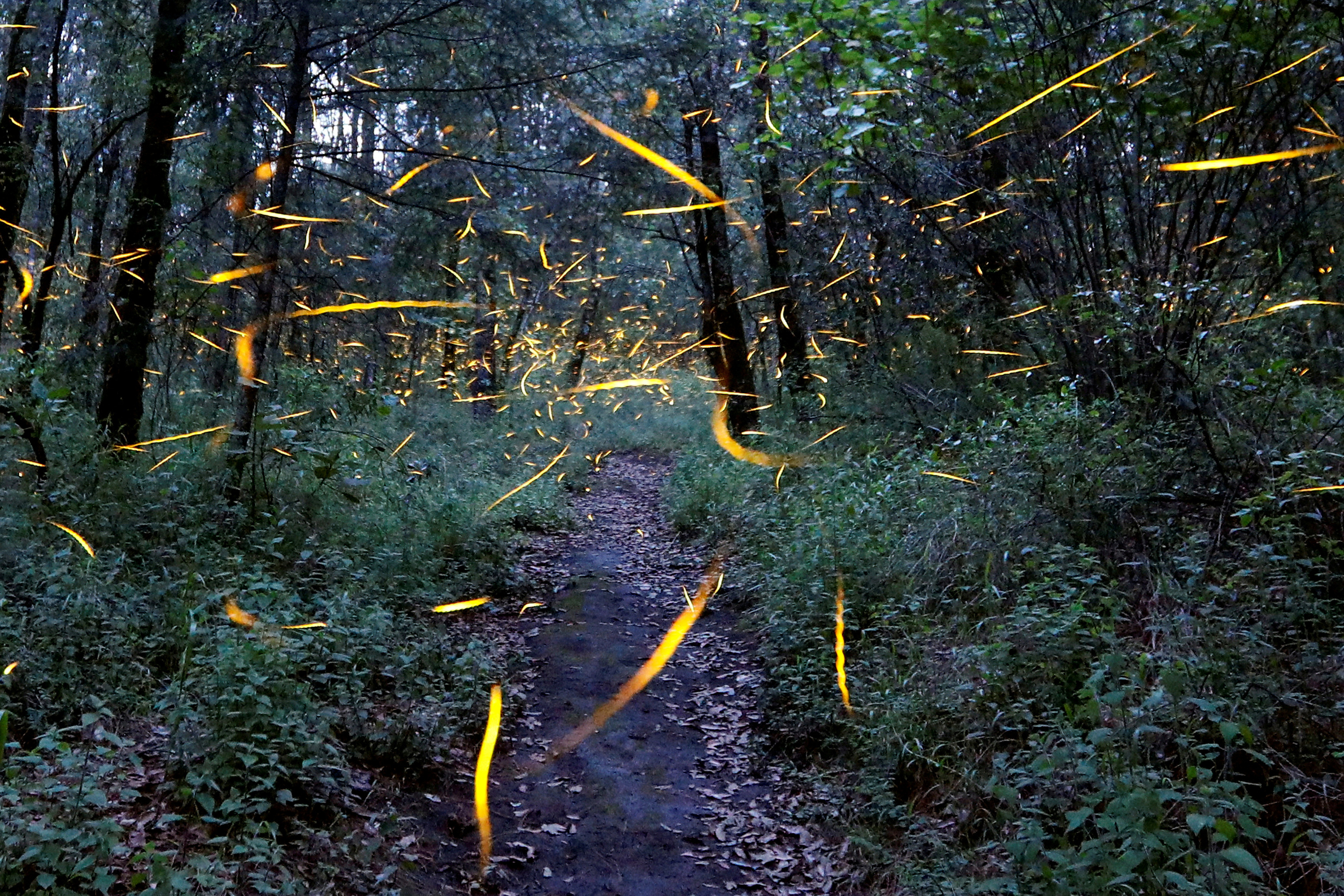 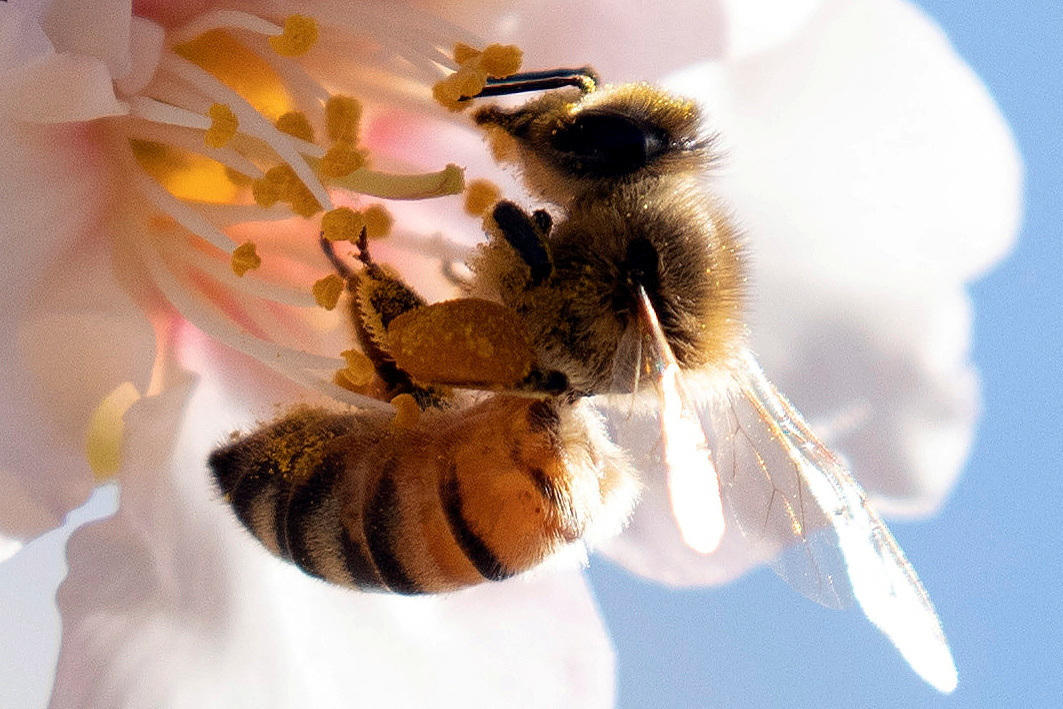 A bee sits on a flower budding from an almond tree, which rely on natural pollinators for fertilization in an Almonds grove in Tel Arad, southern Israel March 4, 2020. REUTERS/ Amir Cohen/File Photo 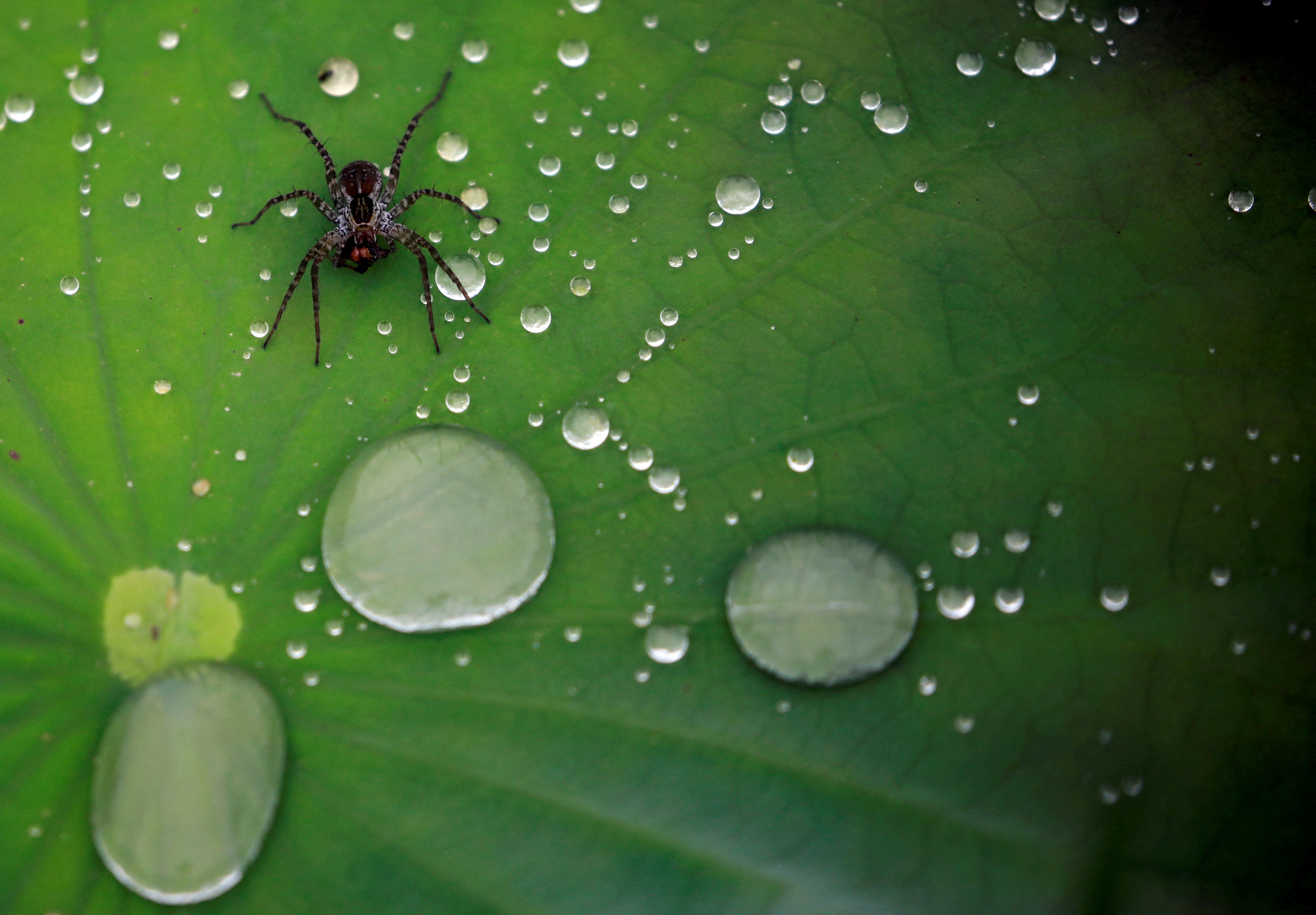 A spider is pictured on the leaf of a lotus after the rain at a pond in Lalitpur, Nepal September 26, 2019. REUTERS/Navesh Chitrakar/File Photo 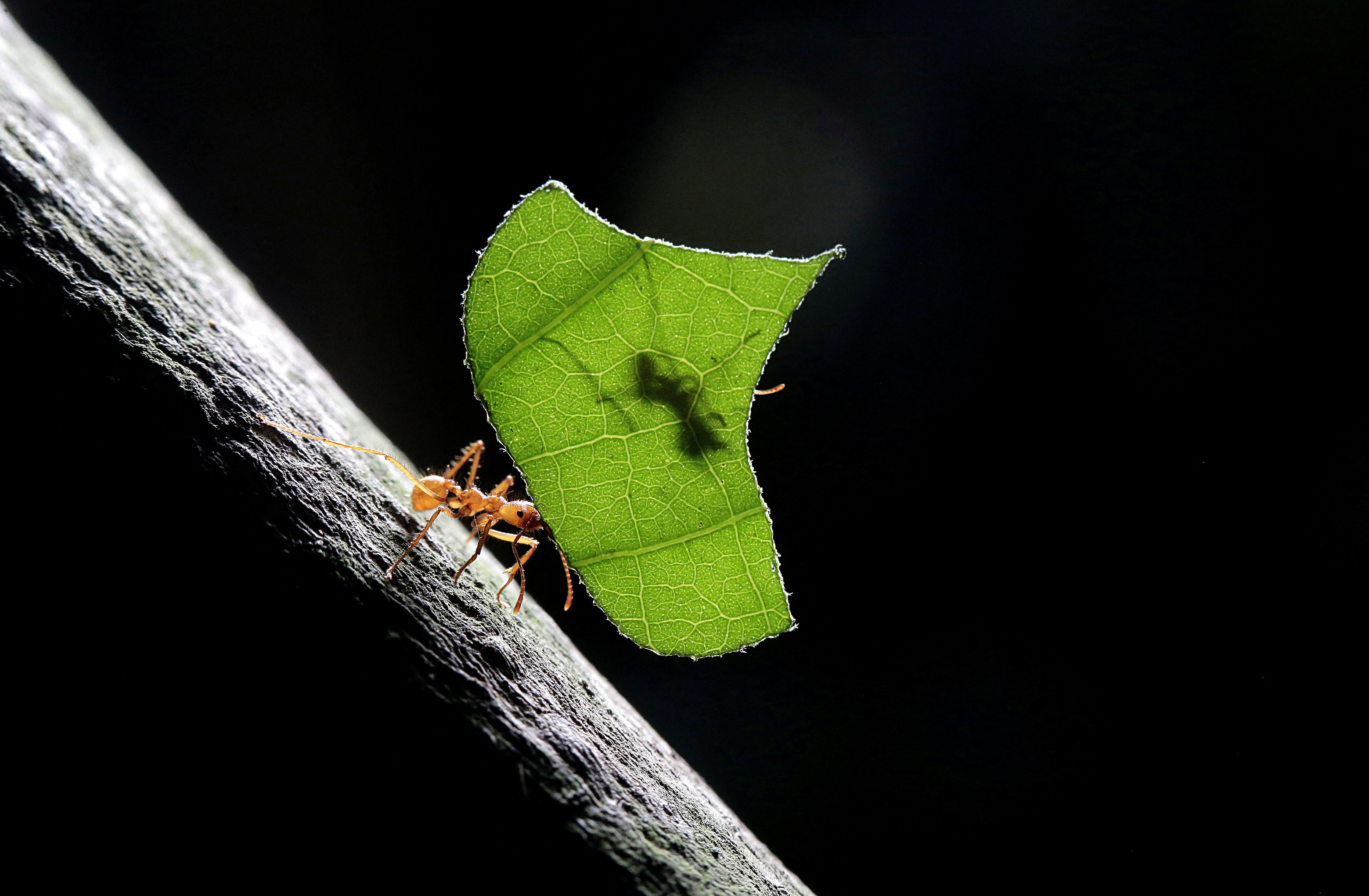 A zompopa ant, reared for human consumption, is pictured in the insect farm of biologist Federico Paniagua, who promotes the ingestion of a wide variety of insects as a low-cost and nutrient-rich food, in Grecia, Costa Rica July 13, 2019. REUTERS/Juan Carlos Ulate/File Photo 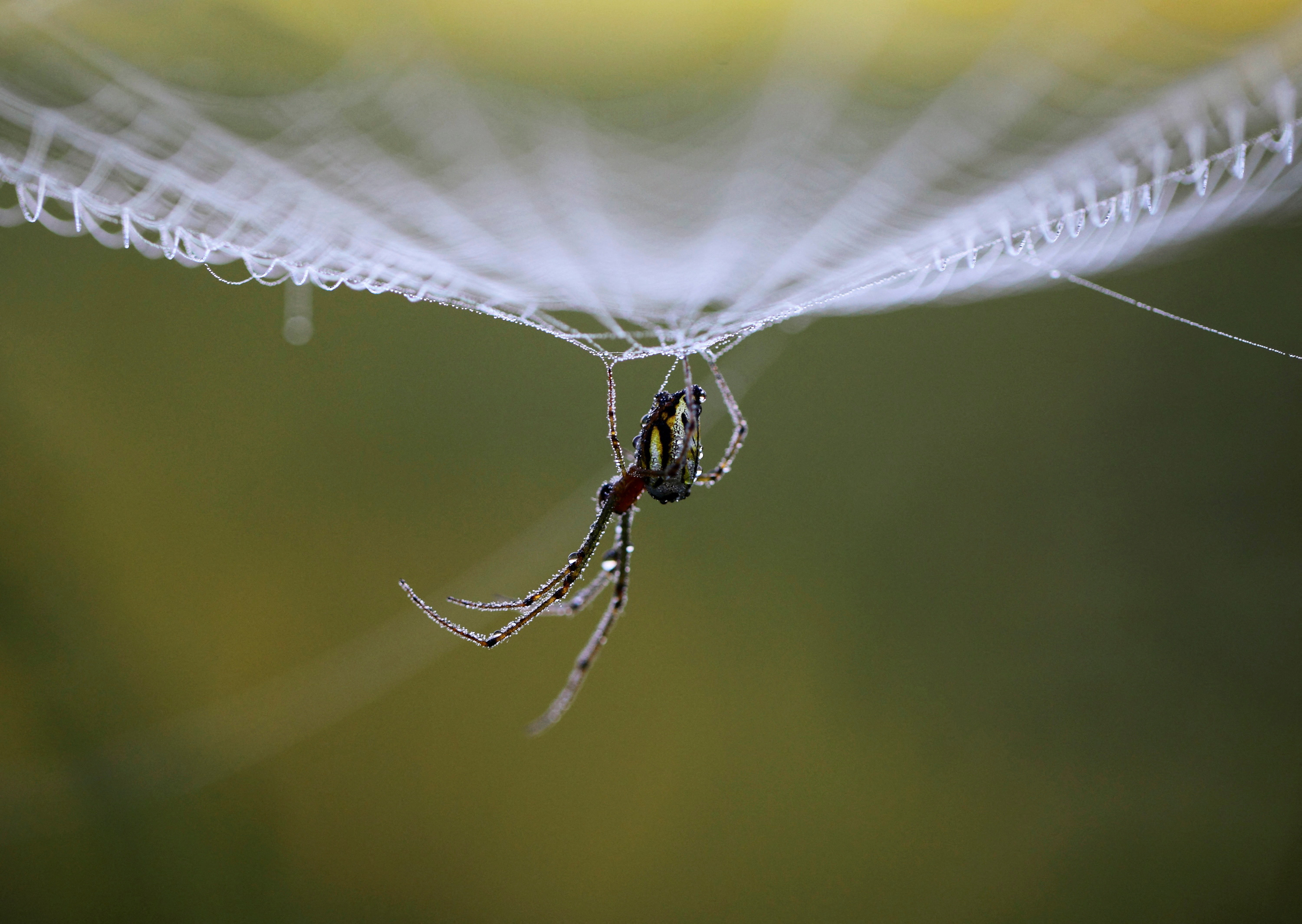 Dew drops gather on a spider as it rests on its web during the early morning in Lalitpur October 11, 2011. REUTERS/Navesh Chitrakar/File Photo 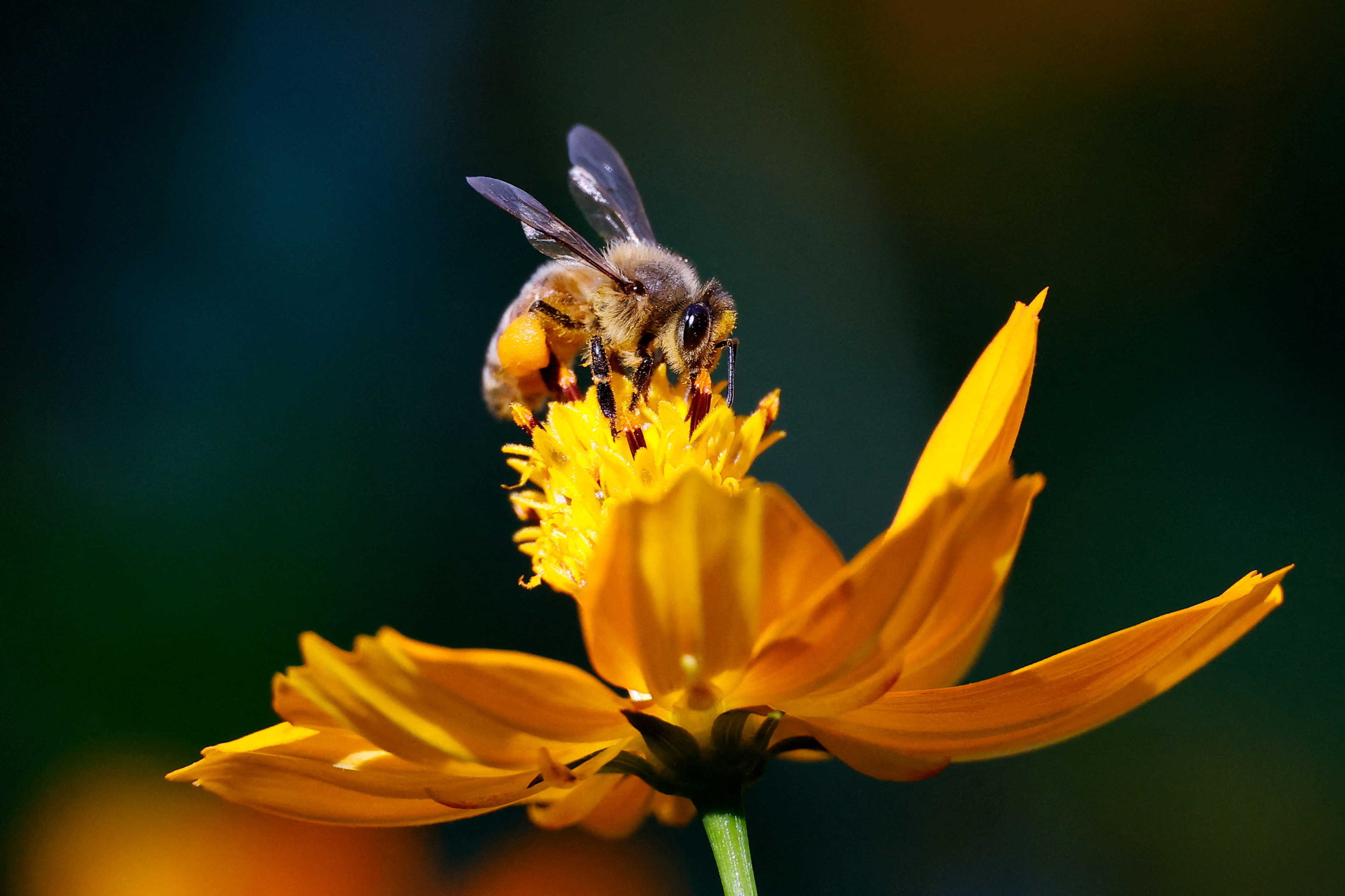 A bee sits on a cosmos flower at a park in Seoul, South Korea, September 13, 2021. REUTERS/Kim Hong-Ji/File Photo