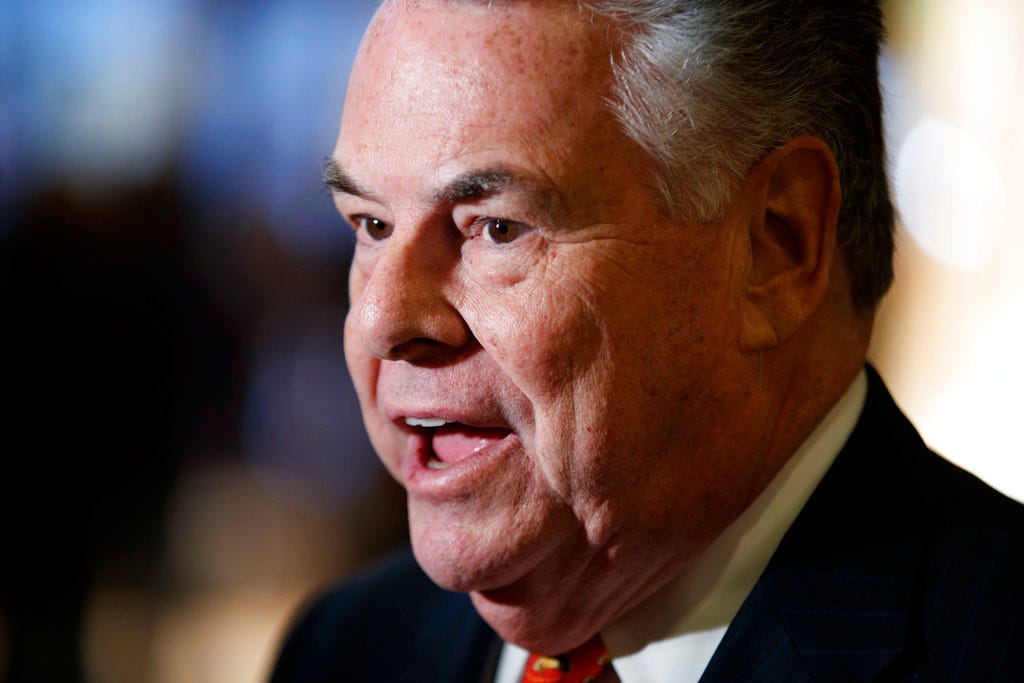 Former GOP Rep. Peter King questioned the effectiveness of embattled Rep. George Santos in the halls of Congress and argued that the congressman’s controversies could very well threaten other Republican members from the Empire State in the 2024 election.

King, who represented a swath of Long Island from 1993 to 2021, stated in an op-ed piece for The New York Times, that he felt it would be tough for Santos to serve a full term given the level of trust that is needed in order to function in such a high-profile role.

“Every time he speaks, every time he asks a question, the media spotlight will be on him — putting shame on him and unwanted glare on the committee and the Republicans who put him there. How do committee witnesses take his questions seriously? How do committee members sit still for this guy in their midst?” King wrote.

“For a member of Congress to be effective, be it through legislation or committee work or deal-making or favor-trading or helping out a constituent, you have to have relationships. It’s very hard to get anything done alone,” he continued to say. “Having served in Congress for 28 years, I cannot imagine how Mr. Santos possibly thinks he can be effective as a member of the House, if he thinks about it at all. In modern politics, I can’t recall another freshman lawmaker who took office so completely lacking the trust and respect of his colleagues.”

King, a one-time chairman of the House Homeland Security Committee, then took a swipe at Santos’ proclivity to falsify various aspects of his background, arguing that most members will largely steer clear of the Long Island lawmaker.

“Except perhaps for a few ineffective congressional outliers, I can’t imagine a member of either party working or cooperating with Mr. Santos,” the former congressman wrote. “And when you don’t have that, you’re just faking your way through the workday — something Mr. Santos is apparently pretty good at.”

Santos has refused to resign after a bombshell New York Times report revealed that he fabricated a large portion of his resume, including two fake degrees from Baruch College and New York University, both of which he never attended.

When Santos ran for Congress in both 2020 and 2022, he leaned on his work in the financial services sector to make a case for his election — highlighting his employment at Citigroup and Goldman Sachs. However, neither company could locate any records of his employment at their respective financial institutions.

Last week, Santos was assigned to the House Small Business Committee and the House Science, Space, and Technology Committee.

House Speaker Kevin McCarthy of California has not called on Santos to resign, remarking that the citizens in his district voted to send him to the nation’s capital.

But back on Long Island, several top Republican leaders have called on him to step down.

“I do not know Mr. Santos, but it is hard to see him as anything other than delusional if he thinks he can function or that there is a result of his continued service beyond deepening his own shame,” King wrote in the op-ed.

Republicans currently have a slim 222-212 House majority, and King stated that the seats of vulnerable GOP members could be seriously jeopardized by Santos.

“Failure to do what’s morally and politically right could cause voters across New York to punish Republican officeholders in a presidential election year because the GOP did not find a way to dump Mr. Santos,” King wrote.

“As long as Mr. Santos remains in Congress, he is dead man walking and will be unable to get anything done for his constituents. For at least this one moment in his life, it is time for Mr. Santos to face reality, do the honorable thing and resign the seat in Congress,” he added.