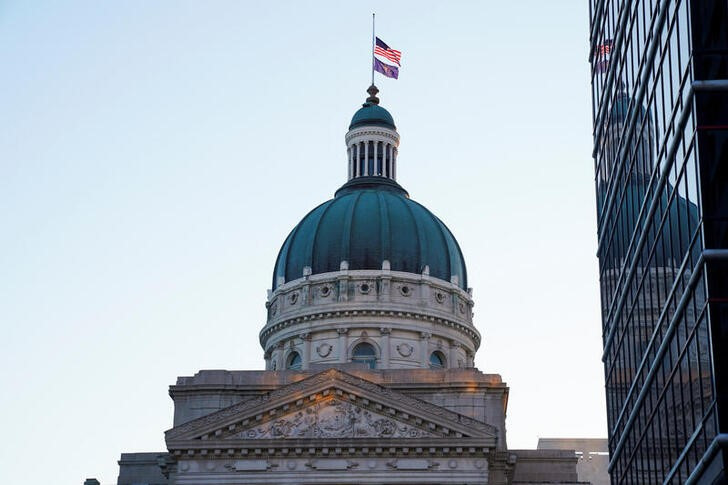 A general view of the Indiana Statehouse shortly before the vote to accept Senate Bill 1, which was passed by the House earlier in the day, making the Indiana legislature the first in the nation to restrict abortions, in Indianapolis, Indiana, U.S. August 5, 2022. REUTERS/Cheney Orr

Indiana’s attorney general on Wednesday asked the state’s medical board to discipline an Indiana doctor who performed an abortion on a 10-year-old rape victim from Ohio in a case that became a flashpoint in the debate over access to the procedure.

His office asked the state’s medical licensing board to determine the appropriate penalty for Dr. Bernard, ranging from a letter of reprimand to permanent revocation of her medical license.

Kathleen DeLaney, Dr. Bernard’s lawyer, said in a statement on Wednesday that her client had complied with all reporting requirements and had discussed the girl’s case “within the bounds of applicable privacy laws.”

“The Administrative Action filed today by Mr. Rokita is clearly a last-ditch effort to intimidate Dr. Bernard and other providers of abortion care,” DeLaney said.

The doctor has said the child was referred to her for an abortion just three days after the U.S. Supreme Court overturned Roe v. Wade, the 1973 case that had guaranteed federal abortion rights.

Ohio was among the states that quickly enforced strict limits on abortion in the wake of the June ruling, sometimes without exceptions for cases of rape or incest.

The attorney general is not questioning whether the girl met the Indiana statutory requirement that she be no more than 22 weeks pregnant. When Dr. Bernard learned of the situation, the girl was three days past the six-week limit in Ohio.

News of the 10-year-old’s case launched a bitter legal battle between Dr. Bernard and Rokita.

Dr. Bernard and her medical partner sued Rokita earlier this month, demanding an end to investigations seeking medical records about patients and their abortions. The lawsuit accused Rokita’s investigation of being a “sham” and said it violated requirements that investigations be based on merit, narrowly focused and kept confidential. read more

Dr. Bernard’s suit said the subpoenas she had received from the attorney general were based on complaints from people who had only heard of the case on the news and repeated the false claim that Dr. Bernard failed to submit a report.

(This story has been corrected to say weeks, instead of months, in paragraph 9)