Jeremy Pope is in great spirits for someone who has been flying back and forth between Los Angeles and New York City. The actor has been doing press for his new movie, The Inspection—a semi-autobiographical film based on the life of writer-director Elegance Bratton and his relationship with his homophobic mother, played by Gabrielle Union—and rehearsing in New York for his return to Broadway later this month in The Collaboration, which begins previews on Nov. 29 and opens on December 20. The onstage production delves into the relationship between artists Jean-Michel Basquiat, played by Pope, and Andy Warhol, played by Paul Bettany.

But Pope is no stranger to being busy. The past few years have seen him barely resting between his roles in movies, television shows, and Broadway productions, not to mention releasing his own music. The 30-year-old actor made his Broadway debut in 2018 in Choir Boy, written by Moonlight co-writer Tarell Alvin McCraney, and then joined the cast of Ain’t Too Proud—a jukebox musical based on The Temptations. At the 2019 Tony Awards, he became the sixth actor in the award show’s history to be nominated for two performances in the same season, nabbing the nomination for Best Performance by an Actor in a Leading Role in a Play for Choir Boy and Best Performance by an Actor in a Featured Role in a Musical for Ain’t Too Proud.

Pope has also had roles on two high-profile Ryan Murphy projects: Pose and Hollywood, as well as playing Jackie Wilson in Regina King’s feature film directorial debut One Night in Miami…, with an upcoming role as Sammy Davis Jr. in Janet Mock’s Scandalous!.

In an interview with TIME, Pope spoke about what it was like to be a vessel for Bratton’s story in The Inspection, his return to Broadway, and remembering to be present for his moments of continued success.

Here are excerpts from that conversation.

Courtesy of A24Jeremy Pope in The Inspection

TIME: When did you know that you wanted to be a performer? Is it everything you expected it to be?

Pope: I think it was really in high school when I was choosing between doing track or the school musical, which was Cats that year—an interesting choice for a high school production—but it was the first time I felt the power of storytelling and what a gift it could be to the audience. I moved to New York and went to college for acting, and the pieces just started to align. I think it is everything I dreamed it would be.

In the new movie The Inspection, your character, Ellis French, is inspired by writer-director Elegance Bratton’s life as a young, gay, Black man who joins the Marines. What was that like?

I was a sort of vessel for him. Early on, we said, in order for this to work, we have to trust each other. It was really me asking him to trust that the version of French that I create will be the right version of French. You have to allow me to create alongside you. It’s an accumulation of us finding our truth and our harmony together. In a film that’s centering a Black, queer man, I could use this experience to bring up some of my own pain and abandonment and then bring it to the surface of healing and love, and self-discovery. We were able to shoot the movie in just 19 days in the summer in Mississippi with 117-degree weather. So the elements were very, very, very real. It was the most emotionally and physically demanding role, but very fulfilling.

There are some harrowing scenes. Did you and Bratton have conversations about the merits and possible drawbacks of portraying such violence onscreen?

There were a lot of conversations. Specifically about the shower scene and I think it was because it had happened to me, in a variation. I didn’t want to shoot it. I don’t want [French] to get beat up. I understood what it meant for the story. We have to be brutally honest with our experience. I think if we’re going to bring people in, they need to be all the way. 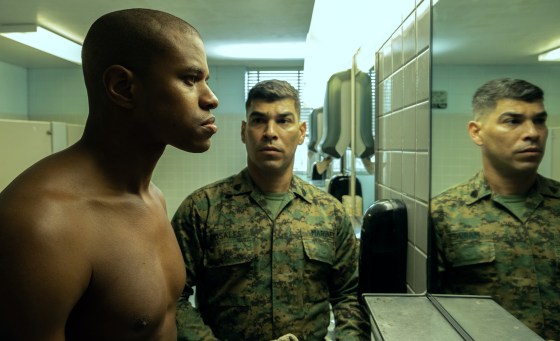 Was it hard, physically or emotionally, to film those scenes?

I remember there was one time years ago in New York. I was walking home, wearing a blue denim button-down shirt, and someone just came up and punched me in the face. I remember the people that had witnessed it were like, “Just go home, just go home,” wanting to protect me.

With that shower scene, as complex as it is for French to exist in this institution that is hyper-masculine, [Bratton] and I didn’t have to talk about what it feels like as a queer man to walk in a space where there are other men walking around naked. It was mostly about the feeling of, “I just don’t want anyone to [notice I’m looking] because then my safety is in jeopardy.” It was a tough day shooting that. [Bratton] has gone through some traumatic and hard things, but that isn’t all that he is. He’s having his feature film debut with A24, healing and providing something tangible for Black, queer representation. That is the takeaway.

Ha! No, that was not his truth. But it was one of those moments that was like, “Oh, if only I had done that at that moment!” It was a brilliant moment and I was like, “French needs to have a Marilyn Monroe and there needs to be full contour.” I’ve never done drag but this needs to be the drag moment. It gives people that hoo-rah moment that they need in the film.

A lot of your roles grapple with masculinity. Did you intentionally seek that out?

You don’t know what job is around the corner. I just tried to center myself in these stories by working with collaborators that are unique, that approach the business in a different way. I didn’t grow up seeing Black queer artists. I didn’t grow up seeing a Black gay movie star. I grew up in the church. My dad’s a professional bodybuilder. So I’m always in spaces that are challenging this idea of what is a man, what masculinity is.

I feel stronger than ever. I’m doing therapy. I feel like I have the emotional bandwidth that goes so high and so low. I have the ability to empathize and understand people that don’t want the same life as me, and that’s through storytelling.

You’ve played a lot of historical figures: Jackie Wilson (One Night in Miami…), Temptations member Eddie Kendricks (Ain’t Too Proud), and Jean-Michel Basquiat in The Collaboration. How do you approach a role based on a historical figure versus a fictional one?

The boring answer is you read books and you Google. But for me, it’s about trying to get as close as you can to someone’s heart and soul. I’m definitely in the Basquiat mindset right now, and his art is my way into his mind. We see that reflected in the words and the drawings that are on his canvas, so I try to use that to mark where was he at emotionally, intellectually, creatively at this time. You can do all the research, but there has to be a human inside. I think that’s what brings people in and that’s what makes the performance or connection undeniable.

You’ve also acted in different mediums: the stage, the small screen, the big screen. Where do you feel most at home, or do you always hope to move between them?

I think moving between them all is fun and exciting because it makes it new. Theater gave me the best foundation as an actor. I consider theater and Broadway to be like military and Marines practice because we’re doing shows eight times a week while also trying to stay sane during the winter in New York City, and that’s just tough. But it taught me to be consistent. It taught me how to show up for my company of actors and tell the story over and over.

My reach is so much bigger in the medium of TV and film with series [on streamers] like Netflix. There are people all over the world that are being affected and changed by this visual thing that you created and that’s been beautiful. The gift within the goal would be able to just find stories throughout them all.

In just a few years in the industry, you’ve received Emmy, Grammy, and Tony nominations in addition to Oscar buzz for The Inspection. What has it been like to see your success snowball so quickly?

There’s been a lot of highs and a lot of lows. My family is everything to me—blood family and chosen family—to keep me on the ground and keep my perspective in check, so I feel so very grounded. I feel very taken care of by my people so I can continue to be OK with the highs and the lows. Embracing that and knowing that life is not meant to always be a high and not meant always to be a low—that’s just a part of living that is a part of being an artist and a creative.