Lula blamed the former President for enabling thousands of gold miners in a nationally-protected territory where mining is banned. As illegal mining flourished during Bolsonaro’s tenure, a humanitarian crisis emerged in the territory they call home that is roughly the size of Maine. The miners have been accused of poisoning rivers with mercury and wrecking forests; the Yanomami depend on both for food sources. Activists have also accused miners of death threats and sexual violence.

“More than a humanitarian crisis, what I saw in Roraima was a genocide. A premeditated crime against the Yanomami, committed by a government impervious to the suffering of the Brazilian people,” Lula tweeted on Sunday, a day after visiting a clinic for Yanomami patients in Boa Vista. He accused the previous government of disregard and neglect for encouraging the “invasion of 20,000 illegal miners.”

Close to 30,000 Yanonami people live in Brazil’s Indigenous territory that spans Brazil and Venezuela. They maintain a way of life based on fishing, hunting, and fruit gathering.

Lula also told reporters during his visit that he will eliminate illegal mining in Brazil but did not offer further details on policies or programs to achieve the goal. 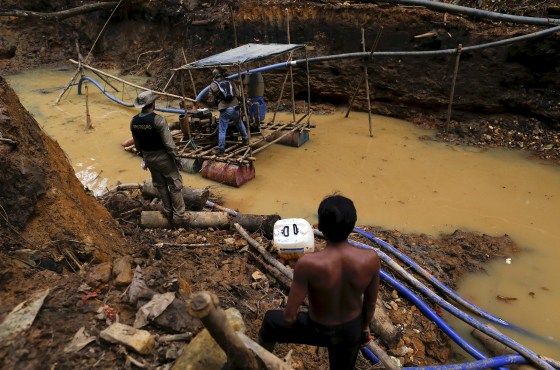 Bruno Kelly—ReutersA Yanomami man, right, stands near an illegal gold mine on Indigenous land in the heart of the Amazon rainforest, in Roraima state, Brazil, in April 2016. Illegal miners continue to plague the area, sawing down trees and poisoning rivers with mercury in their lust for gold.

Brazil’s Minister of Justice and Public Security Flávio Dino said last week that federal police would investigate the possibility of genocide and other crimes against the Yanomami people.

The accusation of genocide is controversial but critics of Bolsonaro say abuses against the Yanomami reflect his broader policies toward the environment.

Bolsonaro has denied responsibility and dismissed the accusation of genocide as a “left-wing farce,” according to The Guardian.

Read more: Lula’s Victory in the Brazil Elections Is a Win for the Planet

Public health advocates have been vocal in recent years about threats faced by the Yanomami community as a result of mining. A report “Yanomami Under Attack” by the São Paolo-based nonprofit Socio-Environmental Institute found that in the last four years of Bolsonaro’s government, the death of children who were aged five or younger jumped 29% compared to the previous government. The report also found that the region was responsible for half of Brazil’s malaria cases and that more than 3,000 children were malnourished. Images showing malnourished children recently surfaced in local news reports.

“The mining activity changes the soil, creating puddles which are favorable for the malaria mosquito, and other diseases as well. Many miners also bring diseases with them. It’s a sanitary and humanitarian crisis,” Estêvão Benfica, geographer and one of the Socio-Environmental Institute researchers, told the Associated Press.

The Minister of Indigenous Peoples, Sônia Guajajara, said the government’s priority is getting a handle on malaria, malnutrition, and other issues that the Yanomami people face. “Every 72 hours a child is dying from one of these illnesses, according to the information we’ve received,” she said.

Guajajar has called for the miners to be expelled within the next three months.