Late last month, Shanghai resident Pei was one of many people who came out in support of historic protests against China’s COVID-19 curbs, including filming several seconds of footage of a man being arrested on a street corner.

Almost immediately, Pei said, five or six plainclothes police grabbed him. He was taken to a police station and held for 20 hours, at times with his arms and legs tied to a chair, he told Reuters.

“The policeman who shoved me into the car tried to intimidate me by saying I should be worried if other people find out what I did. Feeling defiant, I told him, I will let the world know what you police are doing,” said Pei, 27. He asked to be identified only by part of his name for fear of repercussions.

Now, as many Chinese residents welcome a relaxation of lockdown measures that have crippled businesses and stoked unemployment, some protesters scooped up by China’s security apparatus face an anxious wait about their fate.

While Pei and other protesters were released with a warning, some rights lawyers and academics note President Xi Jinping’s hard line on dissent over the past decade, and say risks remain of further harassment and prosecution.

“‘Squaring the accounts after the autumn harvests’ is the Party’s way of dealing with people who have betrayed it,” said Lynette Ong, a University of Toronto professor, referring to the practice of delaying score settling until the time is ripe.

Last week, in a statement that did not refer to the protests, the Communist Party’s top body in charge of law enforcement agencies said China would crack down on “the infiltration and sabotage activities of hostile forces” and would not tolerate any “illegal and criminal acts that disrupt social order”.

Asked about the protests, China’s foreign ministry has said rights and freedoms must be exercised lawfully.

Reuters was unable to establish how many protesters are still in police custody. Social media appeals for details on the whereabouts of a handful of missing protesters remain online.

The protests, widely seen as a tipping point to an easing in tight COVID restrictions, largely petered out in several cities after police mounted a heavy presence on streets.

The repercussions of protesting in China have grown in recent years under Xi’s tenure, with the Ministry of Public Security introducing guidelines two years ago that have been used by local authorities to ban protesters from taking up jobs such as tour guides or insurance agents, and also make it harder for their family members to obtain government-related jobs.

Zhang Dongshuo, a Beijing-based lawyer who has handled rights cases in the past, said the levels of punishment for protesting in China vary widely.

Those deemed to be bystanders could be let off with a small fine and up to 15 days’ detention, while physical altercations with police could lead to jail terms for disrupting public order or “picking quarrels” and provoking trouble.

Those who shouted slogans calling for the ouster of Xi or the Communist Party – as seen in a number of protests across China – potentially face heavier charges of inciting or engaging in subversion of the state, Zhang said, which in the most extreme cases carry punishment of up to life in prison.

Eiro, another Shanghai protester who was detained after trying to stop police from taking away a fellow protestor, said that during her interrogation, police particularly wanted to know if anyone had distributed blank A4 sheets of paper that were a defining symbol of these protests, as well as the identities of protest organisers.

“The police said there’ll be no punishment for all of us this time, but may call us back after further investigation,” she told Reuters on an encrypted messaging app.

Pei, Eiro and other protesters Reuters spoke to said they were asked by police to sign letters of repentance, with some of them asked to read the letters aloud while being filmed.

During Hong Kong’s protracted anti-China, pro-democracy protests in 2019, thousands were arrested but only charged much later with offences such as rioting and subversion, and many are still in legal proceedings.

“I probably won’t go (protesting) again in the short term,” Eiro said. “Everyone was impulsive this time and had no experience. We hadn’t prepared well and there wasn’t any mature organisation and communication platform that could unite and organise everyone.”

During a meeting in Beijing last week with European Council President Charles Michel, Xi attributed the dissent in part on youths frustrated by the pandemic, according to one senior EU official.

Alfred Wu, assistant professor at Lee Kuan Yew School of Public Policy in Singapore, said a harsher crackdown was only more likely if authorities believed the protests to be organised and political in nature, rather than leaderless and spontaneous.

“They just sprang up organically because people were driven by a sense of hopelessness and desperation about the never-ending COVID restrictions,” Wu said.

For some, however, the desire for broader political freedoms remains undiminished even with the COVID relaxation measures.

“I don’t think this is good news or a victory in our struggle because what we are asking for is liberty,” said Eiro.

Despite the looming shadow of future reprisals by authorities, Pei said he had no regrets.

“It was worth it. It allowed me to personally see the Communist Party’s control over our speech, and to see how the freedom of the people under its rule is deeply restricted.” 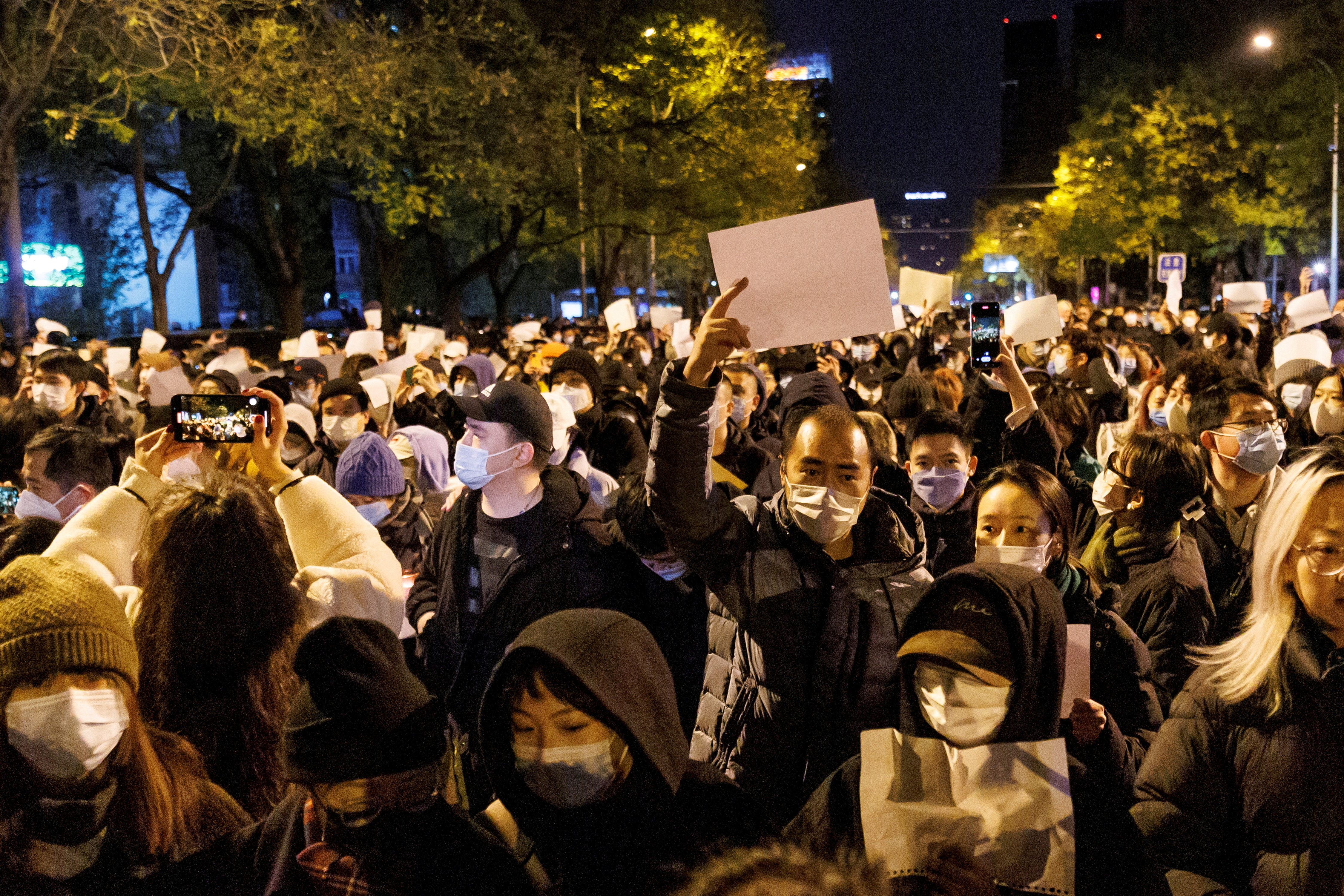 People hold white sheets of paper in protest of coronavirus disease (COVID-19) restrictions, after a vigil for the victims of a fire in Urumqi, as outbreaks of the coronavirus disease continue in Beijing, China, November 27, 2022. REUTERS/Thomas Peter 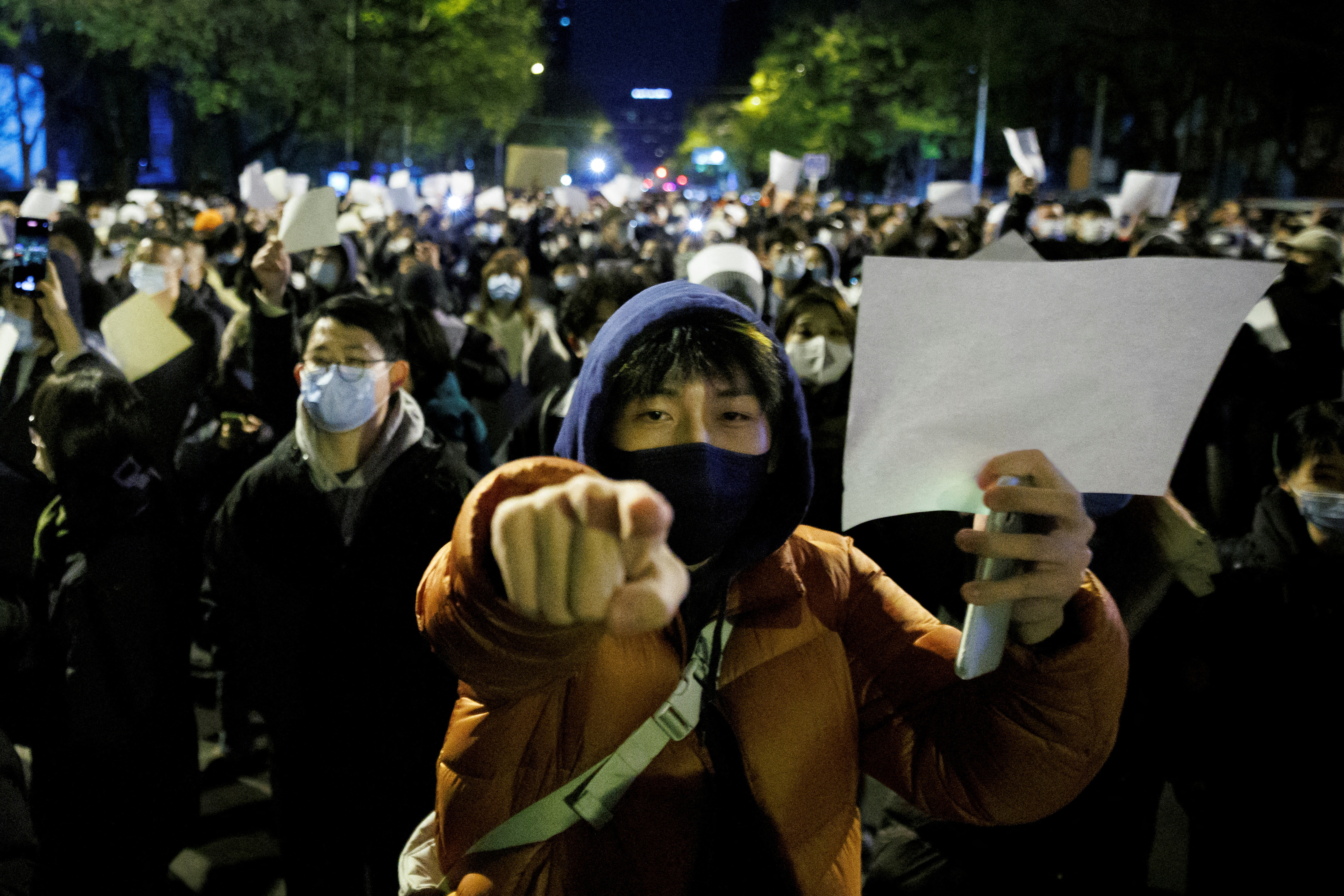 People hold white sheets of paper in protest over coronavirus disease (COVID-19) restrictions, after a vigil for the victims of a fire in Urumqi, as outbreaks of COVID-19 continue, in Beijing, China, November 27, 2022. REUTERS/Thomas Peter