Public school districts in the United States spend, on average, 9.5% of their budget, or $1,440 per student, on capital projects, which includes spending on school building construction, equipment purchases, and bus acquisition. Notwithstanding the magnitude of these costs, schools should probably be spending more on capital projects, since over half of all public school districts are in need of physical improvement in their schools. Moreover, per-student capital spending has been historically higher in the highest-income districts compared to the lowest-income districts (in the average state), though the gap has narrowed since 2008.

Is there anything that can be done to reduce these historical gaps in capital spending? This is the subject of my new working paper, where I explore the role of access to credit as a leading factor in these spending patterns. In the paper, I provide the first nationwide, comprehensive evaluation of state credit enhancement of school district debt.

The average annual spending figures mask the fact that capital outlays are “lumpy”: districts pay a large upfront cost to acquire the infrastructure and then use it for many years to come. To pay for the upfront cost, districts often borrow money from investors by issuing bonds on the municipal bond market. The interest rate on a bond varies across districts and bonds. To help market the bond, a district may hire independent credit rating agencies to assess the creditworthiness of the bond and to assign an underlying credit rating.

Holding all else equal, a higher credit rating is associated with a lower interest rate. As I demonstrate in the paper, bond market data shows that, on average, districts serving communities with higher levels of poverty receive lower ratings and thus face higher costs to borrow. Understandably, higher borrowing costs often correspond to lower levels of capital spending.

Districts with low credit ratings can try to enhance them externally, and, historically, private bond insurance companies filled that need. By paying an insurance premium, a district would obtain a pledge from the insurer to serve as the backup payer and receive the insurer’s rating as the enhanced credit rating, and thus obtain access to lower interest rates. Municipal bond insurance previously provided the highest-possible, triple-A rating and was purchased for around three quarters of school bonds. However, following the Great Recession, the insurers have experienced significant downgrades and can no longer offer the universal appeal of a triple-A rating.

School districts with low credit ratings could pursue another method to improve their credit: credit enhancement through the state government. Currently, 24 states have credit enhancement programs for their districts. State credit enhancement is a pledge by the state to take certain actions, such as intercepting state aid or temporarily using state funds to pay the interest or principal on school bonds if a district is unable to do so.

With state credit enhancement, a district receives an enhanced credit rating carried by the state program, which is largely benchmarked to the state’s rating. The district, therefore, may benefit if the enhanced rating is higher than the district’s underlying rating. Because low-income districts are more likely to have low underlying ratings, state enhancement is most attractive to them. This is essentially a method that states can use to lower districts’ borrowing costs without directly spending money, as it is analogous to a parent co-signing on a loan for a child. A majority of the 24 states offering credit enhancement limit it to only general obligation school bonds backed by district general revenue but not revenue bonds repaid with specific revenue sources such as sales taxes or charges. Many state credit enhancement programs also require approval by the state for each bond issuance and charge a nominal fee.

But does state credit enhancement actually help close capital spending gaps? To identify the impact of state credit enhancement on school districts’ interest rate and capital spending, I first compare, within each state, school districts that received state enhancement on all bonds issued between 2009 and 2019 to those whose bonds were never enhanced. The latter group mostly has underlying ratings similar to or higher than the state program’s rating, and thus state enhancement likely provides little benefit. A concern, however, is that the always-enhanced districts, which have lower underlying ratings and are more likely to serve economically disadvantaged students, may have different interest rates and capital spending levels from the never-enhanced due to other, unobserved factors. Therefore, in separate analyses, I compare bonds enhanced by the state to unenhanced bonds of the same district. This enables me to observe the implication of issuing enhanced bonds while controlling for district-specific characteristics.

The two analyses generate remarkably similar results. School bonds with state enhancement enjoy an interest rate reduction at around 14 basis points (0.14 percentage points). To put it into perspective, the average interest rate paid by districts is 2.36% during the study period. Moreover, the interest rate reduction is larger for higher-poverty districts. High-poverty districts with very low credit ratings may be priced out of the private bond insurance market but can benefit tremendously from the state programs.

The lowered cost of debt may suggest an increased ability to borrow for capital investment. Indeed, I find that capital spending increases by 6% to 7% after a district issues state-enhanced bonds as compared to unenhanced bonds. The impact on capital spending is more pronounced for high-poverty districts. The increased capital spending associated with state credit enhancement, however, does not translate into improvements in student test scores, on average.

In sum, the empirical evidence suggests that state credit enhancement has the potential to offer significant interest savings to school districts and spur additional education infrastructure investment. For a state to provide meaningful credit enhancement, the state government must have a sufficiently strong credit rating that is higher than the ratings of bond-issuing districts within the state. I calculate the potential savings districts in the 26 non-program states could have achieved from 2009 to 2019, had credit enhancement programs existed in these states. Up to $56 billion of school debt could have been enhanced, with a net-present-value saving of $385 million to $1 billion.

States may be concerned that providing the pledge to prevent district default may increase their own financial risk and their interest rate. My results suggest the financial risk to states is very small. A comprehensive search and interviews with state agencies show that across the 24 states with credit enhancement programs, state intervention was triggered only once for a district in Pennsylvania. Further, additional analyses fail to find a correlation between state interest rates and the amount of school debt enhanced by the state. The safeguards embedded into the design of state credit enhancement programs and the rarity of school district default may have both contributed to the lack of a “moral hazard” in pledging state support to school district debt.

If carefully designed, credit enhancement programs may be a valuable policy tool to support educational infrastructure investment, which will help improve capital spending for school communities that need it the most. 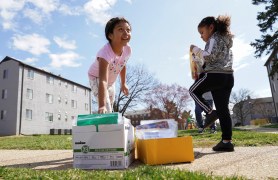