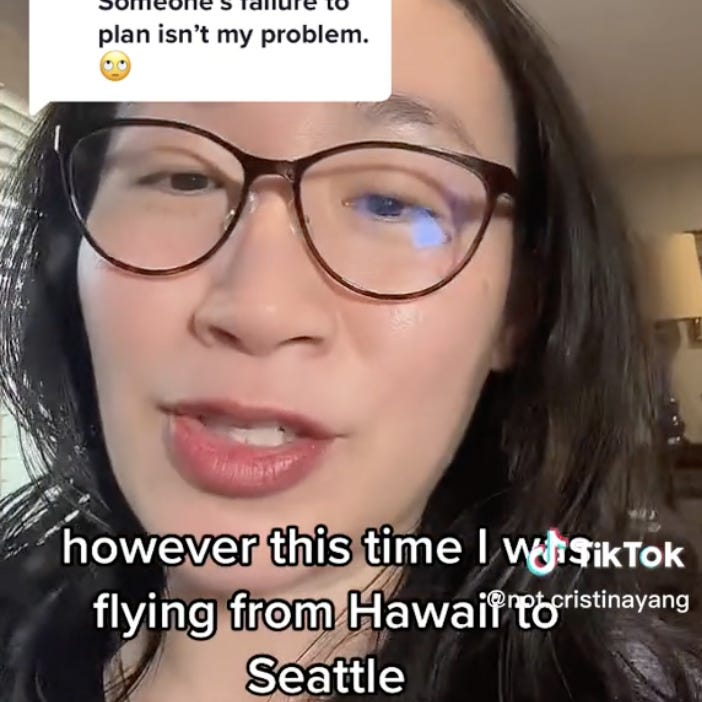 Seattle-based TikToker @not.cristinayang is receiving praise from thousands for interrupting an awkward encounter between two passengers on a flight home.

Earlier this month, the creator posted a video to TikTok explaining a time she once helped a woman sitting next to her in premium economy class to keep her seat when another passenger asked to swap.

In the clip, she explained that a “soft-spoken” Asian woman — whom she later referred to as “Connie” — was sitting in the middle between herself and another passenger, when a fourth passenger approached with a question.

The unnamed fourth passenger asked Connie to switch seats, from row eight to a seat in row 26, so they could sit with their friend, according to the video. The TikToker pointed out that sitting in row 26 would remove the woman from premium economy, where she said they received unlimited snacks and drinks.

In response to her protest, the unnamed woman who wanted to switch seats explained that it would be a window seat with more room than Connie’s middle seat. But, the TikToker said she didn’t stop defending the older woman.

When the other passenger continued to insist, she resorted to pretending they were traveling together.

“We’re both Asian. Of course we know each other, ” she said. “The little Asian lady was looking at me, and I go ‘Sit down Connie!'”

Her conviction saved the woman her seat, and the other passenger was forced to go back to her spot in row 26 for the rest of the four- to five-hour flight, according to the video.

“I guess I was meaner than the other lady,” the TikToker said.

@not.cristinayang Replying to @mixedchick132 the audacity of some people #flying #assignedseats ♬ original sound – Not it

The video has since garnered over three million views and more than 11,000 comments — mostly praising the creator for stepping in to stand up for the woman.

“May your coffee always be hot, green lights on your drives, and close parking spots in the parking lot,” one user commented.

Other commenters gave their thoughts on unspoken airplane etiquette rules that travelers should follow.

“You don’t ask someone to downgrade for your convenience,” one comment read.

The Memphis Police Chief is warning the footage of Tyre Nichols’ arrest in Tennessee shows a “disregard for humanity”. The man accused of killing seven people in Half Moon Bay, California, has reportedly admitted to the shooting. The Federal Reserve could be pumping the breaks on its interest rate hikes. 11 ISIS members have been killed in Somalia. Plus, the FDA says it’s time to start regulating CBD products.