MOSCOW, Idaho (NewsNation) — Students are fleeing and residents remain on edge more than a week after four students were brutally stabbed to death in the small Idaho college town of Moscow.

All four victims were members of fraternities and sororities. The women were roommates and Chapin was dating Kernodle.

“There’s a lot of anxiety and a lot of people not knowing what to do to keep their friends and family safe,” one student told NewsNation.

The FBI and the state police are assisting local police in the investigation. Moscow hasn’t had a murder case in about seven years.

Authorities are asking for help in the investigation, which has yet to reveal suspects, including asking for people to come forward with surveillance video.

If you saw something suspicious on the night of Nov. 12, or have any information, call the police tip line at 208-883-7180 or email to tipline@ci.moscow.id.us.

School officials are organizing a vigil on campus for Nov. 30 when students will be back from Thanksgiving break. Yet it is unknown at this point if the school will push students to return. On Thursday, University President Scott Green sent a memo to students saying:

“We need to remain flexible this week and grant our students and colleagues room to process these unprecedented events in their own way. Students, you are encouraged to do what is right for you. Whether this is going home early or staying in class, you have our support.”

Here’s what we know about the slain students’ final hours, and the investigation that has followed.

8 p.m. Ethan Chapin and Xana Kernodle, who were dating, attend a party at the Sigma Chi fraternity house.

10 p.m. Kaylee Goncalves and Madison Mogen hang out at a local sports bar, the Corner Club in downtown Moscow, for several hours.

1 a.m. Two surviving roommates returned home. Police say they may have slept through the attack.

1:40 a.m. Madison Mogen and Kaylee Goncalves are seen on video ordering food from Grub Truck, a local food vendor. They wait about 10 minutes for their food, and can be seen chatting with each other and other people standing by the truck.

Food truck manager Joseph Woodall, 26, told CNN the two students did not seem to be in distress or in danger in any way.

The pair then uses a “private party” to get a ride home. (Police say they have cleared the driver of any connection with the crimes.)

Approximately 1:45 a.m. All four of the murdered students arrive back at the house.

Approximately 2:30 to 3 a.m. Goncalves’ repeated calls to ex-boyfriend Jake Schriger go unanswered. Family members say this was not unusual, and police say Schriger is not connected to the crimes.

Approximately 3 to 5 a.m. The four students, who were believed to be sleeping at the time, are killed in the house. The coroner later states some had defensive wounds, and each was stabbed multiple times. There was no sign of sexual assault.

Shortly before noon: Two surviving roommates wake up. After finding one of the victims on the second floor unresponsive, they call friends over to the house.

11:58 a.m. A 911 call is received about an “unconscious individual” on one of the surviving roommates’ phones. Responding officers find the four students killed. (Police have declined to name who made the call, but said they are not being investigated as a suspect.)

Police say there were no signs of forced entry when they arrived, finding a bloody and gruesome scene. “It was a pretty traumatic scene to find four dead college students in a residence,” Latah County Coroner Cathy Mabbutt told a local TV station. 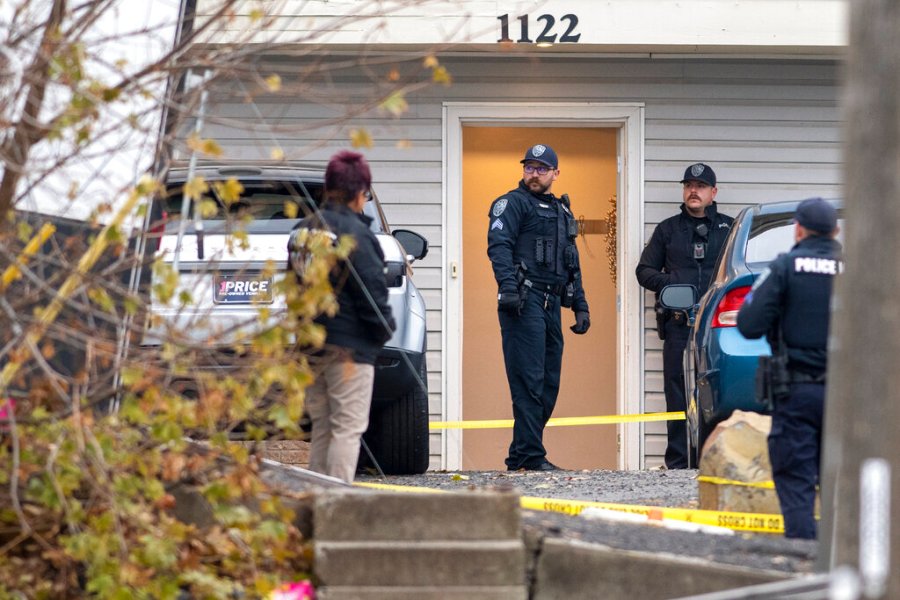 Officers investigate a homicide at an apartment complex south of the University of Idaho campus on Sunday, Nov. 13, 2022. Four people were found dead on King Road near the campus, according to a city of Moscow news release issued Sunday afternoon. (Zach Wilkinson/The Moscow-Pullman Daily News via AP)

Family members report the home was known as a “party house” and that previous visitors may have known the keypad lock code.

3 p.m. University of Idaho posts an alert on social media channels about the murders and tells students to shelter in place, an instruction that was rescinded about 45 minutes later.

Later that afternoon, police confirm the deaths of the four students to the media for the first time.

Police release the names of the students killed. The FBI arrives to assist with the investigation. 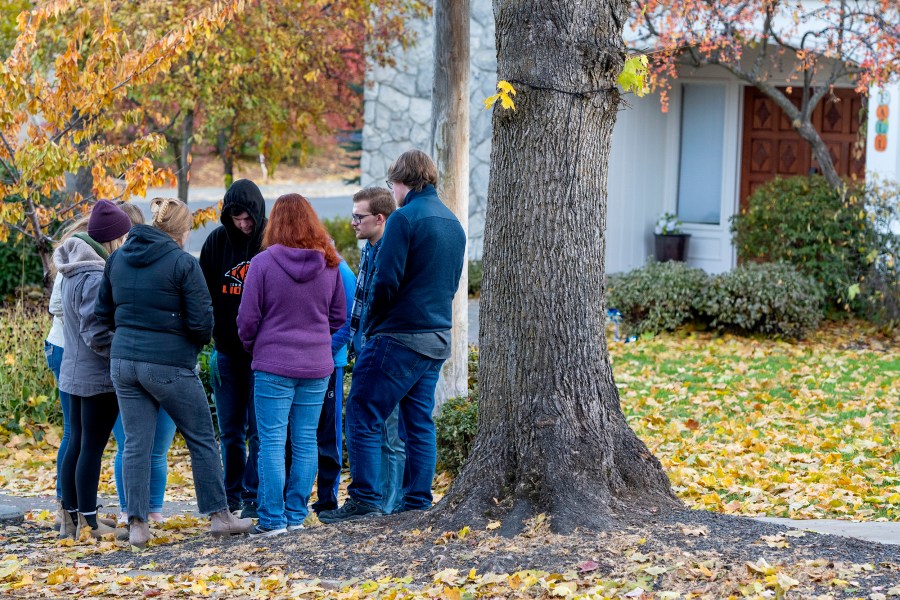 People gather to pray outside of the Pi Beta Phi sorority house at the University of Idaho after four students were found dead at an apartment complex south of campus, including two sorority members, on Monday, Nov. 14, 2022, in Moscow, Idaho. The Moscow Police Department has labeled the deaths as “homicides” but maintains there is not an active risk to the community. (Zach Wilkinson//The Moscow-Pullman Daily News via AP)

More information comes out about the weapon used, saying it was an “edged weapon such as a knife.”

In a joint news conference with the FBI, local police walk back previous safety assurances, saying they are unable to determine if the public is at greater risk.

“We cannot say there’s no threat to the community and as we have stated, please stay vigilant, report any suspicious activity and be aware of your surroundings at all times,” Moscow Police Chief James Fry said.

More information is released from the coroner about murders, officially naming the cause of death “homicide — murder.”

Police debunk misinformation being shared online about the crimes during a news conference. Detectives also search three dumpsters, which they later say did not contain much evidence.

Moscow Police Chief James Fry said authorities have received nearly 650 tips and conducted 90 interviews so far. Still, no suspect has been arrested and the murder weapon has yet to be found.

“No one is in custody and that means no one is safe,” sister Alivea Goncalves told the Idaho Statesman in a statement. “Yes, we are all heartbroken. Yes, we are all grasping. But more strong than any of these feelings is anger. We are angry. You should be angry.” 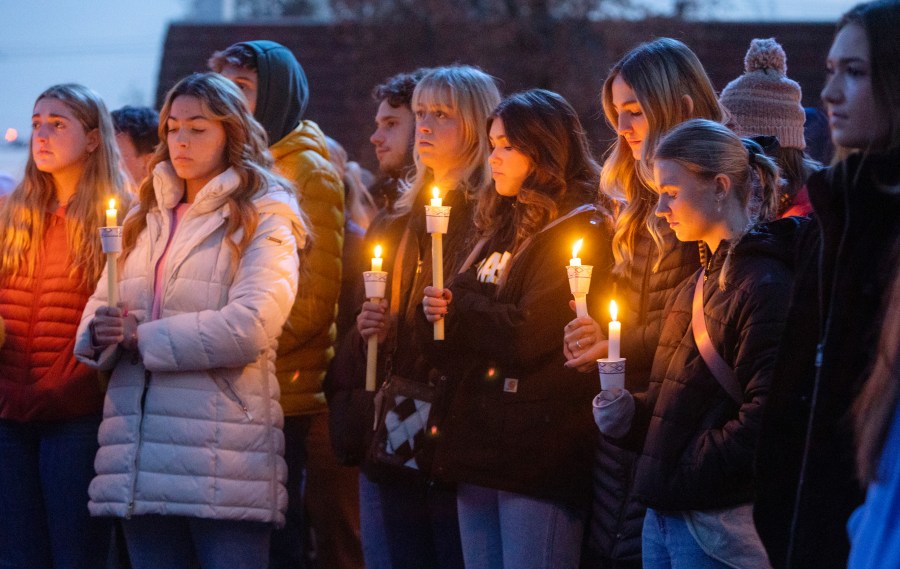 Boise State University students, along with people who knew the four University of Idaho students who were found killed in Moscow, Idaho, days earlier, pay their respects at a vigil held in front of a statue on the Boise State campus, Thursday, Nov. 17, 2022, in Boise, Idaho. Autopsies performed on the four students who were found dead inside a rental house near campus showed that all four were stabbed to death, the Latah County coroner said. (Sarah A. Miller/Idaho Statesman via AP)