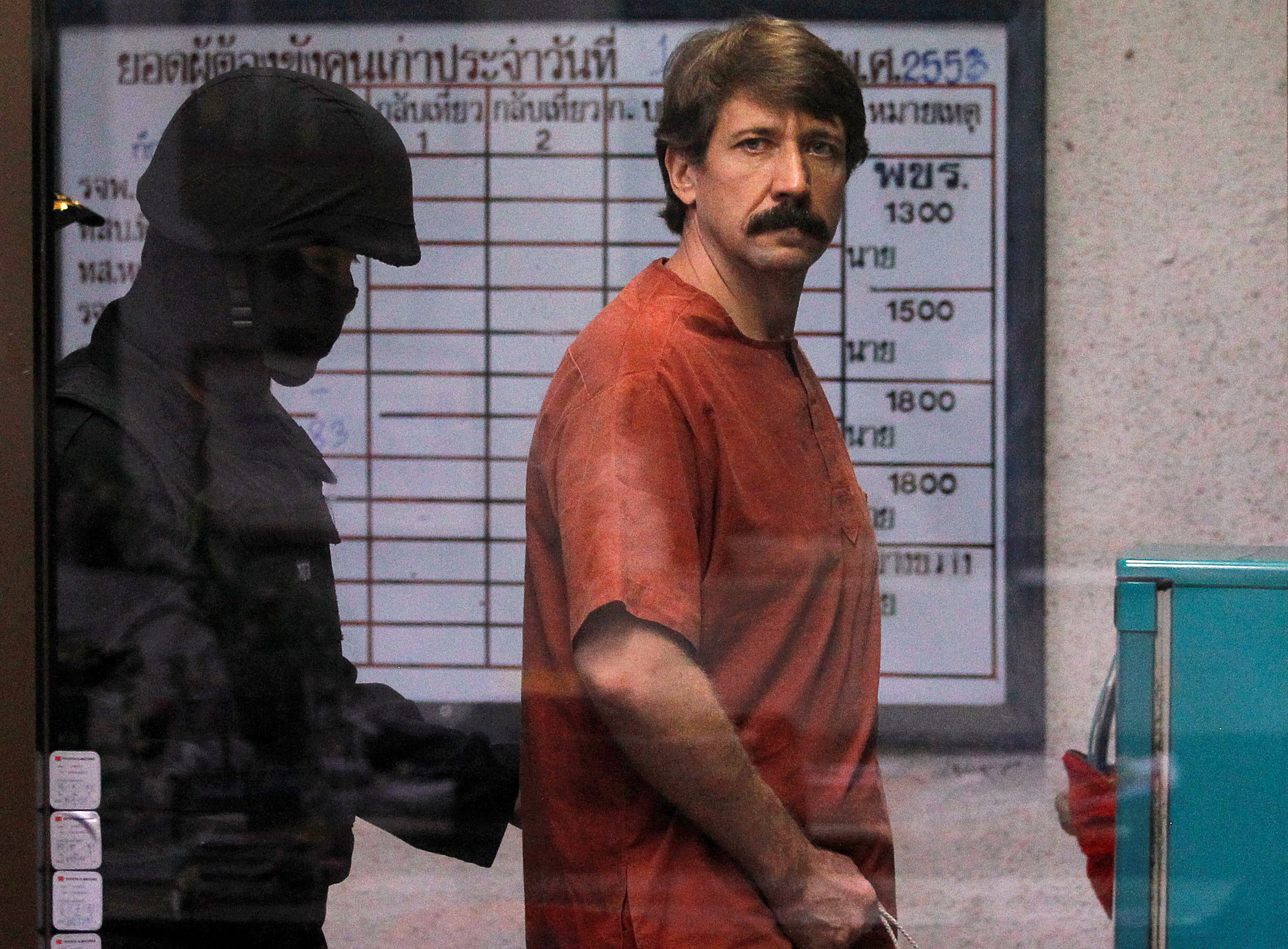 Alleged arms smuggler Viktor Bout from Russia is escorted by a member of the special police unit as he arrives at a criminal court in Bangkok October 4, 2010. Thailand’s criminal court held a hearing today on a second case lodged against Bout. REUTERS/Damir Sagolj/File Photo

The life of Viktor Bout reads like a spy thriller.

Russia wants the jailed arms dealer back in Moscow and is discussing a prisoner swap with the United States that could see him exchanged for Americans imprisoned in Russia including basketball star Brittney Griner.

Variously dubbed “the merchant of death” and “the sanctions buster” for his ability to get around arms embargoes, Bout, 55, was one of the world’s most wanted men prior to his 2008 arrest on multiple charges related to arms trafficking.

His notoriety was such that his life helped inspire a Hollywood film, 2005’s Lord of War, starring Nicolas Cage as Yuri Orlov, an arms dealer loosely based on Bout.

Even so, Bout’s origins remained shrouded in mystery. Biographies generally agree that he was born in 1967 in Dushanbe, then the capital of Soviet Tajikistan, close to the border with Afghanistan.

A gifted linguist, who later used his reported command of English, French, Portuguese, Arabic and Persian to build his international arms empire, Bout reportedly attended the Dushanbe Esperanto club as a young boy, becoming fluent in the artificial language.

A stint in the Soviet army followed, where Bout has said he achieved the rank of lieutenant, serving as a military translator including in Angola, a country that would later become central to his business.

Bout’s big breakthrough came in the days after the 1989-91 collapse of the Communist bloc, cashing in on a sudden glut of discarded Soviet era weaponry to fuel a series of fratricidal civil wars in Africa, Asia and beyond.

With the Soviet Union’s vast air fleet disintegrating, Bout was able to acquire a squadron of around 60 old Soviet military aircraft based out of the United Arab Emirates, by which he could supply his products around the world.

A 2007 biography entitled “Merchant of Death: Guns, Planes, and the Man Who Makes War Possible” by Douglas Farah and Stephen Braun reported several details of Bout’s murky trade. Reuters could not independently verify its description.

From a base in the Gulf emirate of Sharjah, he interwove his arms trafficking empire with a seemingly innocuous logistics business, always insisting when queried that he was a legitimate entrepreneur with respectable clients and no case to answer.

Even so, Bout, who first appeared on the CIA’s radar amid reports of a shadowy Russian citizen trading arms in Africa, was by the turn of the millennium one of the most wanted men in the world.

But Bout, whose clients included rebel groups and militias from Congo to Angola and Liberia, had little in the way of firm ideology, tending to place business above politics.

In Afghanistan, he variously sold guns to Islamist Taliban insurgents and their foes in the pro-Western Northern Alliance, according to “Merchant of Death”.

The end only came in 2008, after an elaborate sting operation by the U.S. Drug Enforcement Administration saw Bout tracked across multiple countries to a luxury hotel in Bangkok.

During a spectacular sting operation, Bout was caught on camera agreeing to sell undercover U.S. agents posing as representatives of Colombia’s leftist FARC guerrillas 100 surface-to-air missiles, which they would use to kill U.S. troops. Shortly afterwards, he was arrested by Thai police.

After over two years of diplomatic wrangling in which Russia loudly insisted that Bout was innocent and his case politically charged, Bout was extradited to the United States, where he faced a raft of charges, including conspiracy to support terrorists, conspiracy to kill Americans, and money laundering.

Bout was tried on the charges related to FARC, which he denied, and in 2012 was convicted and sentenced by a court in Manhattan to 25 years in prison, the minimum sentence possible.

Ever since, the Russian state has been keen to get him back.

On Aug. 5, the United States and Russia said they were ready to discuss a prisoner swap, a day after basketball star Griner was sentenced to nine years in prison for bringing cannabis-infused vape cartridges into Russia. read more read more

Russian Deputy Foreign Minister Sergei Ryabkov said on Friday that it hopes a possible swap including Bout could be agreed.

“Viktor Bout is among those who are being discussed, and we certainly count on a positive result,” Ryabkov was quoted as saying by Interfax.

Sources familiar with the situation told Reuters that Washington had offered to exchange Bout for Griner and former U.S. Marine Paul Whelan, who in 2020 was sentenced to 16 years in jail for spying. read more

Russian Foreign Minister Sergei Lavrov has said Bout’s extradition from Thailand was “a glaring injustice” and suggested he was innocent.

Comments from a 2012 interview with the judge who presided over Bout’s New York City trial that his 25-year sentence was “excessive” have occasionally been seized on by Russian media making the case for Bout’s return home.

Earlier this year, speculation rose that Bout was set to be exchanged for Trevor Reed, a U.S. Marine Corps veteran jailed in Russia on assault charges. Reed was ultimately freed in return for Konstantin Yaroshenko, a Russian pilot jailed in the United States on drug trafficking charges.

For some experts, the Russian state’s continued interest in Bout, plus his skills and connections in the international arms trade, hint strongly at Russian intelligence ties.

In interviews, Bout has said he attended Moscow’s Military Institute of Foreign Languages, which serves as a training ground for military intelligence officers.

“Bout was almost certainly a GRU agent, or at least a GRU asset,” said Mark Galeotti, an expert on the Russian security services at the Royal United Services Institute think-tank, referring to Russia’s military intelligence service.

“His case has become totemic for the Russian intelligence services, who are keen to show that they don’t abandon their own people,” Galeotti added.

According to Christopher Miller, a journalist who has corresponded with neo-Nazis imprisoned along with Bout at United States Penitentiary Marion in Illinois, the former arms dealer keeps a photo of Russian President Vladimir Putin in his cell and says he does not believe Ukraine should exist as a state.

Reached by Reuters over the WhatsApp messaging service, Bout’s wife Alla, who lives in St Petersburg, said: “We very much hope that everything will be resolved and an agreement will be reached.

Home » Audio Sources - Full Text Articles » Who is Viktor Bout, the arms dealer who could be swapped for Griner?
a